...Says His Appointment Is Catalyst For Speedy Development
By Kenneth Orusi, The Nigerian Voice, Asaba 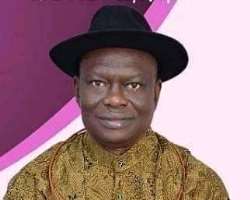 The Nigeria Union of Journalists, (NUJ), Delta State Council, has congratulated its pioneer Chairman, Chief Ovuozuorie Macaulay, on his appointment as the Managing Director of the newly established Warri, Uvwie and its Environs Development Agency.

The Council in a release Monday signed by the Chairman, Comrade Michael Ikeogwu and Secretary,of State Comrade Churchill Oyowe, respectively said the appointment was well thought out bearing in mind the antecedent of Chief Macaulay's penchant for confronting challenges head on.

According to the release, It is on record that Chief Macaulay's footprints as a one time chairman of the Nigeria Labour Congress have remained unmatched in the Delta State Council having not only brought vibrancy to labour unionism in the state but succeeded in moving the council from a temporary secretariat to its permanent site.

"It is also on record that Chief Macaulay erected the solid foundation on the ongoing development of the NUJ permanent press centre when he served as Secretary to the Delta State Government, SSG".

The Union recall that as Commissioner for Conflict Resolution, Chief Macaulay was instrumental in brokering peace in the Warri crisis that ended in 2004 and as Commissioner for Energy, he attracted verve in both rural and urban electrification through massive installation of transformers and other electrical accessories in the state.

"Chief Macaulay ascendancy to the post of SSG further placed him in a position where he reached out to all and sundry across the 25 local government areas in the Delta State and outside, building bridges of development and touching lives meaningfully".

While welcoming him on board, they said Chief Macaulay's latest appointment is not only as a call to serve in a familiar terrain but also as an opportunity to bring to bear his excellent testimony of his capacity to deliver.

The Union appreciated the state governor Ifeanyi Okowa, for the well thought out choice of a Managing Director of the new agency and wished Chief Macaulay exceeding success in his new assignment.