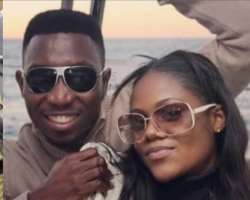 The Police on Saturday invited soul singer, Timi Dakolo and his wife, Busola, a celebrity photographer, for interrogation over alleged falsehood.

The invitation letter, which was delivered at the Lekki residence of the Dakolos around 6pm, may not be unconnected with the allegation of rape by Busola against the founder of Commonwealth of Zion Assembly (COZA), Pastor Biodun Fatoyinbo.

Busola had alleged Fatoyinbo raped her at 16 in Ilorin while attending his church.

The allegation led to the stepping down of the flamboyant Abuja-based preacher pending the conclusion of the investigation.

The invitation letter signed by Deputy Commissioner of Police IGP Special Tactical Squad Force Headquarters, Abuja asked the couple to report for interrogation on Tuesday by 10am.

The couple was accused of “criminal conspiracy, falsehood, mischief and threat to life.”

There was drama during delivery of the invitation letter as the couple raised alarm with the social media awash with the alleged invasion of their private residence by police operatives.

Calls to Police spokesman Frank Mba were not answered or returned.

But a police source ssys the Police authorities will issue a statement shortly on the matter.