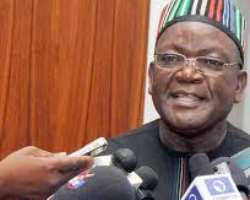 Benue State Governor, Samuel Ortom has thrown his weight behind former President Olusegun Obasanjo’s call for a national dialogue on the present challenges rocking the nation.

He spoke on Saturday when he received the President of Evangelical Church Winning All, ECWA, Reverend Stephen Panya Baba, at the Benue Peoples House, Makurdi, the state capital, according to a statement sent to DAILY POST by his Chief Press Secretary, Terver Akase.

The statement reads, “The Governor urged President Muhammadu Buhari to call for a National Dialogue Forum where Nigerians would frankly speak on issues affecting the country, particularly insecurity and proffer solutions.

“As an interim measure to end the wave of threats and counter threats from different sections of the country, Governor Ortom recommended that security operatives should not ignore those beating drums of war.”

Akase said Governor Ortom further condemned the latest order the Fulani herders association , Miyetti Allah Kautal Hore has given to its members to defend themselves, describing the order as capable of causing unimaginable violence.