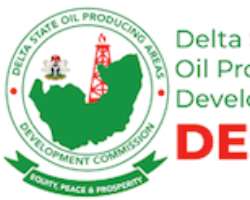 Irked by the alleged exclusion of indigenes of their community from the list of nominees into the new board of the Delta State Oil Producing Communities (DESOPADEC) submitted by the Delta State governor, Ifeanyi Okowa, for confirmation by the Delta State House of Assembly on Thursday, the people of Diebiri-Batan, a major oil producing community in Warri south-west local government area of the state have launched a major protest to disrupt oil production in the area.

The nominees as members of the Board of DESOPADEC include Paul Bebenimibo who is nephew to the leader of the defunct Movement for the Emancipation of Niger Delta, Chief Government Ekpemupolo (a.k.a. Tompolo), Mr Grifton Omastsuli, Dr Paul Oweh and Chief Kent Okiemute.

However, speaking with newsmen on the composition of the new board of the Commission, leaders of the protesting Diebiri-Batan Community claimed that other major Ijaw communities except Diebiri-Batan have, since inception of DESOPADEC, ''produced either a Commissioner, Executive Director or Chairman of the Board, contrary to the internal rotational formula'' for sharing such appointments.

In a petition to Okowa, the protesters wondered why they would ''be shortchanged in the recent appointments by the Delta State Government'' when it was their turn to be appointed as Commissioner into the DESOPADEC Board.

Mr Dickson Ogugu, an engineer and spokesman for the Diebiri-Batan Community, urged the State Government to correct the monumental error and injustice, describing the exclusion of a Diebiri-Batan indigene from the Board of DESOPADEC, as an "abnormality."

The protesters noted that ''equity demands that Diebiri-Batan should be part of Government, especially after supporting and voting massively for the Peoples Democratic Party (PDP)'', vowing to ''use all constitutional means to correct this abnormality'', alleged neglect and marginalization.

The community noted that Diebiri-Batan oil production quota was separate from that of any other community or kingdom, and advised the government and the public to disregard any contrary claim.

The leaders of Diebiri-Batan also lamented its neglect in the area of political appointments and infrastructural projects, claiming ''the total lack of government presence in the community, in spite of its enormous quantity of oil production''.

There have also been unconfirmed reports Friday said that a flow-station in the locality had been ''shut down'' by youths protesting the alleged neglect and exclusion from the nascent board of DESOPADEC by the state government.