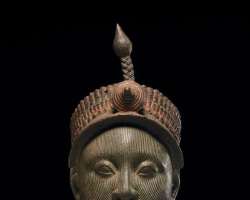 "Now the trumpet summons us again—not as a call to bear arms, though arms we need—not as a call to battle, though embattled we are—but a call to bear the burden of a long twilight struggle, year in and year out, “rejoicing in hope, patient in tribulation”—a struggle against the common enemies of man: tyranny, poverty, disease and war itself...."

- John F. Kennedy, January 20, 1960
In certain quarters, views have been expressed whether when we eventually get our own Nation, the Oodua Nation, we would be saved the agonies of incompetence, the anguish of corruption and or throes of treacherous leadership.

Doubts are essential for true progress. They are the greatest tools of the wise. Doubts help to measure where you are and where you need to be and how to get there.

Doubts are the barometers of our dreams, the thermometer to measure the temperature of our efforts and the stethoscope to gauge the beating of our hearts in the face of adversity. Our efforts must not go cold. Our hearts must be strong enough to face the adversities.

We could not and should not be afraid of our future in Oodua Republic. If Obafemi Awolowo was afraid, he would not take the bulls by the horns in 1951. It would have a great opportunity lost.

If Osagyefo Kwameh Nkrumah had given in to fears and intimidation, the birth of Ghana would have been delayed till God knows when.

If Sekou Toure had been cowed by the threats and eventual cruelties of the French, who plundered his country to nakedness, Guinea would have remained in bondage.

Sendar Senghor had not the courage of a titan, the trajectory of Senegal would have been very much different.

If Jommo Kenyatta had not fought like a ravenous leopard, his ancestral lands would still be occupied by the racists from Europe.

If Kenneth Kaunda had not the will to endure and persevere, Zambia might still not be free.

If Julius Nwalimu Nyerere did not strive to overcome his doubts and believe in his own dreams and vision for his people, Tanzania might still be in colonial bondage.

If Mahatma Ghandi and Jawaharlal Nehru had succumbed to the tyranny of the British Empire, India would not have been free in 1948.

If Mohammad Ali Jinnah, Allama Mohammad Iqbal, Agha Khan lll and others had failed to follow their dreams and worked towards them, Pakistan would not have been freed from the British and India.

While our fears propell us to have doubts, our doubts should be tooled towards the unending possibilities of the Oodua Nation; the innate greatness of the children of Oduduwa that would be unboundd and unleashed.

I have confidence in the discharge of the ethos of the fundamentals of Omoluabi as a veritable tool in our arsenal. I have faith that the burst of the cotyledons of patriotic energy, that have been arrested since October 1, 1960, would inevitably, be let lose in a manner never seen in human history.

There would be a joyous eruption of enthusiam to rebuild from the ruins of about 60 years of war with an amorphous but enslaving entity called Nigeria. It would be an unshackling of a Nation after over a Century of British inspired dreary dungeon.

Geographically, we are blessed. Weather is a child of Oodua. Arable land, his twin.

There is nothing that is as priceless as FREEDOM and LIBERTY. There is no greater satisfaction in the entire human history or human psychology that is greater than being in control of your own DESTINY.

If the roads of Nigeria was paved with Gold from Badagry to Maiduguri or Calabar to Sokoto, it would still be gold in slavery. It would be gold in bondage. It would be useless. Meaningless. And valueless.

And by the way, he who owns the slave, owns his belongings.

We must strive to give our children the right to self determine their own DESTINY in a Nation of their own, so that they could prove to the World at large that the Negroid race is not cursed. We should give them the leverage to inspire others.

Oodua Nation is THE MANIFEST DESTINY of the YORUBA PEOPLE.

It could be delayed, but not impeded. Its attainment could be slowed, but could not and would not be frustrated.

With all the anticipated challenges of building a Nation, Oodua Republic would be a beauty to behold. It would be a semiinal study in a positively deployed human capacity in competence and competition.

It would be a perfect example of humaneness of man, the kindness of brotherliness and the affection of sisterliness. It would be an edification of citizenship and adulation of the citizenry.

Our culture shall be decontaminated. Our agelong philosophy of cosmology shall take a pride of place. Our preeminent secularism shall be rebirthed. The Yoruba Language, when revived and refined, shall be a means and ways of class as well as tastely exudation of intellect and civility.

Oodua Nation shall be a veritable pride of the Negroid race, respected by the comity of all Nations.

Like Martin Luther King Jr., I have been to the Mountain Top, I have seen the Promised Land of the coming Oodua Nation, it is full of milk and honey. We shall be there in due course.

We shall occupy, soon and in unity, our God given land. From the banks of River Niger to the belly of the acquiescent ocean, sandwiching luscious and luxuriating gifts of nature.

My fellow Yoruba brothers and sisters, I plead with you to gird your loins and be ready for the imminence of this New Dawn. I beseech thee in the following immortal words of President John F. Kennedy to:

"Let every nation know, whether it wishes us well or ill, that we shall pay any price, bear any burden, meet any hardship, support any friend, oppose any foe to assure the survival of liberty."

Oodua land shall be free.
"In the long history of the world, only a few generations have been granted the role of defending freedom in its hour of maximum danger. I do not shrink from this responsibility - I welcome it."