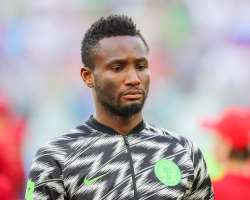 After leading Nigeria to third place at African Cup of Nations in Egypt, Super Eagles’ captain Mikel John Obi has announced his retirement from international football.

“At the age of 32 it’s time for me to retire from the National team and let the youth take over, who’ve done an amazing job securing a bronze medal at AFCON 2019,” Mikel said on Thursday.

Head coach of the Super Eagles, Gernot Rohr, had earlier hinted that John Obi Mikel’s time with the national team is over.

Speaking after the 1-0 win over Tunisia in the Africa Cup of Nations third-place playoff, Rohr admitted he was already looking for replacements for the midfielder.

“We have to salute Mikel’s great career, he didn’t play in the qualifiers but it was good for the team that he is here.

“Now we have to look at others, but we don’t have many midfielders in top clubs.

“We have Semi Ajayi, Iwobi, Etebo, Ndidi. But we have to work hard to find a replacement,” the German said.

Mikel Obi, who struggled with injuries all through the AFCON, only featured in two matches.

Mikel, who signed a two-year deal with a Turkish sports club, Trabzonspor, with the option of an additional 12 months this summer will earn over €150,000 a week, €1.5m (N607m) per season.

The former Chelsea and Middlesbrough will be the highest-earning Nigerian player in Turkey based on basic salary.