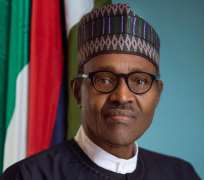 The Federal Government Wednesday released the official portrait of President Muhammadu Buhari, more than 6 weeks after he took office for second term.

The portraits, in which the president was smiling, is to be distributed throughout the country to federal buildings, Ministries, Departments, Agencies of Government, Sub-National Entities, Businesses, according to Permanent Secretary General Services Office, Office of Secretary to the Government of the Federation, Olusegun Adekunle, in a statement.

Digital copies can also be downloaded and viewed on the official website of the Office of the Secretary to the Government of the Federation on www.osgf.gov.ng.