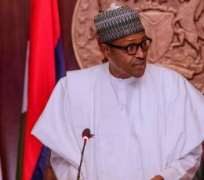 It was also gathered that about 45 per cent of former cabinet members will return to take Buhari's policies to the 'Next Level'.

Of course, the list is as controversial as it is surprising to some who are close to the president.

For example, it was learned that the president has picked Great Ovedje Ogboru to represent Delta State in the Federal Executive Council (FEC) against the choice of Festus Keyamo.

Surprisingly, on the list are the current National Chairman of All Progressives Congress (APC), Adams Oshiomhole; former military administrator of Lagos State, Gen. Buba Marwa (rtd) and the immediate past governor of Bauchi State, Abdullahi Abubakar.

Initially in contention with Ogboru over the slot for Delta State was Keyamo, who played a key role in Buhari's re-election.

But after subsequent reviews of his options, Buhari was said to have resolved to make Keyamo a Special Adviser, while Ogboru, who has attempted the governorship seat a few times, minister.

In the South-West All Progressives Congress (APC), the choice of ministers remains contentious because of competing interests and the president has made his choice without further deferring to APC leaders since there was no consensus amongst them.

For instance, in Oyo State, it was initially a straight fight between Ajimobi and the APC governorship candidate in the state, Adebayo Adelabu.

Shittu was also on the card.
Sources, however, hinted that the lot has eventually fallen on Ajimobi as the candidate for Oyo.

In Osun, there was heightened disagreement over the choice of former governor, Rauf Aregbesola, and others, who thought that the opportunity to serve should be extended to other members of the party for their role in the success of the party during the 2019 elections.

But sources squealed to Freedom Online that Aregbesola, who stood taller than the forces against him, albeit not on account of merit or more contributions to the APC success but the strength of the forces behind him, had been picked.

In Ekiti State, unless the unexplained happens, the first civilian governor of the state, Adeniyi Adebayo, has been shortlisted as the candidate, preferred by the political leadership in the state, especially Governor Kayode Fayemi.

The source declared authoritatively that “there is no way former Governor Segun Oni will become a minister given the forces against him”.

Unfortunately, the situation in Ogun State was said to have presented a rather complex scenario as the various interest groups on the turf of the state, including the familiar external forces, took their rivalry, vested interest and mutual distrust to the national front.

Former Governor Segun Osoba is one of the principal players in this regard.

These seemingly complicated interests from the various political blocks in the state were said to have forced the president to keep the eventual choice from Ogun to himself, with a view to announcing same as a surprise to everyone, when the list would be released in the week to the Senate.

There was also some kind of stalemate in Ebonyi State, where the trio of former Minister of Science and Technology, Chief Ogbonnaya Onu; governorship candidate of the APC in the state, Sonni Ogbuoji and Senator Julius Ucha battled for the only slot from the state.

Thus, in Ebonyi, the president has also refused to disclose his eventual choice candidate, but wanted the individual announced without the pre-knowledge of any of those jostling for the office. But the possibility, sources claimed, was high that Onu might not be lucky this time and might have lost the slot to Ucha.

Kwara too had a situation because Governor Abdulkadir is against Lai Mohammed.

The source declared that Mohammed's name is on the list but there is intense pressure from Abdulkadir, demanding a new person.

The source said Buhari is considering ways to pacify Abdulkadir and his group “but I can tell you that Lai Mohammed is returning to Aso Rock as a minister”.

Much as the name of a former governor of Lagos State, Mr. Akinwunmi Ambode, has continued to fly around as a potential cabinet member, it does not appear so any longer as his fate is now dependent on the size of the cabinet that the president eventually settles for.

The president is still wary of an unwieldy cabinet size and, therefore, adamant on 36 ministers, representing one per state plus the FCT.

But if he changes his mind and pick additional one each from the six geo-political zones with a view to ensuring an inclusive government, then, Ambode is sure to be onboard, clinching the South-West slot.

Over half of the cabinet members did not make the 'Next Level' team, a move believed to have paved the way for some of the new hands brought in to deliver the consolidation agenda of the government as well as stimulate growth and development.

Freedom Online further gathered that the president might likely retain his post as the Minister of Petroleum, while keeping the candidate for the junior petroleum minister close to his chest alone.

Fashola's ministry might be divided into two with only Power ceded to him being the most sensitive of the divisions in the estimation of the president, which requires someone given to details.

Freedom Online learned that there was a very high possibility that the president would send in the names to the Senate with the portfolios attached, a move said to being considered to save time, since a lot of time had already been wasted putting the list together.