We will sustain programmes that would galvanise the economic growth: Shell Nigeria 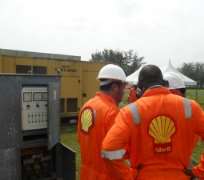 In a statement on Saturday, Weli explained that the global oil multinational company have ongoing projects and social investment schemes in the state.

He enumerated some of them to include the Sea Eagle Floating Production, Storage and Offloading and several gas projects.

He said the SPDC JV had in 2018 spent more than N390 million on developments of projects in its Global Memorandum of Understanding clusters on roads, and schools among in the state.

The Shell general manager also said that 174 youths of the state had so far benefited from the special Regional Shell LiveWIRE programme since 2013, adding that a sum of N108 million was given to beneficiaries as startup grants in 2018.

The general manager also disclosed that SPDC spent N417 million on beneficiaries of the Cradle-to-Career programme.

Weli said: “SPDC JV has strong commitment to the development of Delta and Nigeria through its delivery of positive social outcomes and strong relationships with stakeholders and communities.

“Each year, Shell LiveWIRE Nigeria provides training and finance for talented young entrepreneurs to set up and grow their businesses.

NAN reports that Weli urged stakeholders in the region to make concerted efforts to curb the incessant vandalism of crude oil pipelines, saying it was dangerous to lives as well as the environment.

It will be recalled that SPDC had on Friday unveiled its “2019 Edition of The Shell in Nigeria Briefing Notes” in Warri.

Weli, represented at the event by the SPDC Head, Government Relations West, Alaye Dokubo, said the annual publication detailed activities of the business interests of the global energy giant in Nigeria.

According to him, it covered the activities of the SPDC, Shell Nigeria Exploration and Production Company, Shell Nigeria Gas and the Nigeria Liquefied Natural Gas.