Osun: Now that the strife is over! 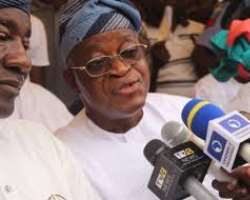 The 2018 Osun governorship election has been effectively concluded. The good, the bad and the ugly have met at the table - in an exercise that was, in the first place, supposed to be a carnival - and all eyes are now on 2022 when the state is expected to return to another dose of this four-yearly ritual. Undeniably, the landmark judgment by the Supreme Court has again confirmed the status of the nation’s judiciary as the final arbiter of social disputes of any form.

That Gboyega Oyetola has emerged victorious in the battle is no longer news. But, does he deserve a clap? Well, not yet! The Holy Book teaches us that “the race is not to the swift, nor the battle to the strong; … rather, time and chance happen to all.” Well, while one expects that all sides have learnt relevant lessons on their way to this pass, it is time the governor moved on and be his own man by redefining governance in his own distinct terms and working towards how he is going to be remembered. At this stage, the ‘excuse’ of lingering governorship litigation awaiting adjudication is no longer an issue! Coincidentally, some quarters have become infested with the notion that he is already is moving fast too slowly; and that is not too good for a state that is desperately in pursuit of 21st century development.

American author and businessman, Kristopher Jones summarized the five commonly-made mistakes by leaders thus: “improperly delegating work”, “communicating poorly”, and “focusing on overall strategy rather than day-to-day tactics.” Others are: "failing to balance a hands-off approach with micromanaging" and "forgetting to train, motivate and reward". According to him, "mistakes are inevitable. But whether you learn from those mistakes or not is what dictates your success." Now that the strife is over, the moves, they say, make the games! Nigerians expect the governor to concentrate on real governance by critically examining issues of sustainable economic policies that can truly help drive the system and mitigate whatever might have been responsible for the state’s present pitiable pass.

The story of Solomon that he prosperously erected the building of a house for the Lord, his own house, and everything that came to his mind is too well-known to bear repeating here. But it offers us a lesson in season! For now, the real issue confronting Osun is how to generate funds and ensure that the state is sustainable. Thus, Oyetola as a man of awesome pedigree needs to demonstrate leadership by following through his cardinal programmes as announced by humble-self. He needs to provide cutting-edge solutions that can accommodate the complications of today's realities and dynamics. While trying to find a good balance between being a good governor and a politician, he must not allow excess supply of spurious narratives and intellectual dishonesty that are symptomatic of surrendering our future to an uncertain fate to distract him. However, his ability to discern the spirit of detachment from the grace of sacrifice will be feasible in the way he sources professionals to manage key sectors of the economy which, in all sincerity, are not doing well for now. Of course, this should not translate into the denial of appointments or deliberate disempowerment of others, especially, those who sacrificed their all for the party while the struggle lasted.

Frankly, the entire policies driving the real and micro-economic sectors of the domestic economy must be re-jigged because, in reality, existing policies are not working. For instance, a condition that has left Ijebu-Jesa Grammar School, my alma mater, with only “10 permanent teachers taking over-450 students” cannot be said to be the best for Osun. If we truly want the state to grow, this must be addressed!

Distractions are a killer of time! As the journey to 2022 started the day the last election was won and lost at the ‘Battle of the Thumbs’, Oyetola must take heed to hit the ground running! One key area where the governor must act fast is the crucial sector of Agriculture. While this sector is supposed to be one of the major sources of economic sustenance for the state, it is unfortunate that the policies on agriculture, as they stand, are ridiculously detached from the people. It is as if those policies are created for the people, not by the people! Little wonder they look like diverse-yet-unpragmatic ventures that are already dead on arrival. Let’s face it: had these policies been widely accepted and successfully implemented, I doubt if Osun will still be talking about rudimentary economic issues in 2019.

Some Nigerians view the amalgam that produced most of Nigeria’s political parties as comprising four different mixtures: progressive, military, caricature, and 'my family and I' – an admixture of rice, beans, corn and guinea corn - each scavenging around Nigeria’s fractured space for relevance. Otherwise, why did the ruling party in Osun have to struggle for victory on September 22, 2018, even when the immediate past administration was believed to have demonstrated visible signs of responsible government? How come impressive accomplishments looked like a mere fiction to the point of almost abandoning ‘alakowe’ for ‘alakori’ in an election earlier predicted to be a walkover for the ruling party?

Kudos to Oyetola for his fantastic vision on the health sector. As a determined person, who believes that ‘health is wealth’, Nigerians are only praying that the extant infrastructure would sustain that vision.

Next is road construction. For now, this is a capital-intensive sector, the burden of which Osun may not be able to shoulder. However, an efficient maintenance culture will keep the existing ones serviceable and useful to the society.

Facing the facts and the realities of life, no government has ever defied the will of the popular wish of the people and survived it. So, governments must always communicate! While those who see huge financial investments in the media as a waste of resources have not devised alternative means of providing “objective facts in the context they are expected”, Bola Tinubu has shown how strategic media and communication can help teach salient lessons in success management!

May the Lamb of God, who takes away the sin of the world, grant us peace in Osun!