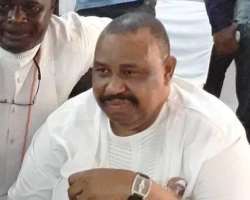 A former chairman of the All Progressives Congress (APC), in Delta state, Chief Adolor Okotie-Eboh, is dead.

The American trained pilot died Saturday at an undisclosed hospital at the aged of 64 after a brief illness.

Meanwhile, a former Governor of the State and Chieftain of the All Progressives Congress (APC), Dr. Emmanuel Uduaghan has expressed shock over the death of the junior Okotie-Eboh, whom he (Uduaghan) described as patriot of the Nigeria’s project under the President Muhammadu Buhari-led administration.

In a statement signed by Mr Monoyo Edon, Uduaghan’s Media Assistant, on Sunday, noted that the APC chieftain contributed to the development of APC in no small measure in Delta State and Nigeria at large.

Uduaghan said, “Chief Adolor’s death is depressing to the Itsekiri nation, the All Progressives Congress and Delta State due to his gigantic contributions to the political narrative of not just Delta State but also Nigeria in general.

“I pray that God would strengthen and console his family in this difficult time. We miss you Omimi Ejor!”