Osun: The Court And The People's Verdict 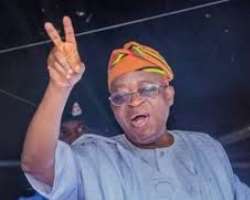 I followed the OSUN state governorship election in the first and the second ballot and I remember vividly the circumstances that brought about the twist to the election and how the state has come to where it is by the verdict of the supreme court as handed down by a split judgement of five to two judges.

OSUN state has so much bled and it is only hoped that the veins can be either stopped from bleeding or the veins will get cut and the state bleeds to death. May posterity forbid the latter!

With the pronouncement of " the election is hereby declared inconclusive' came a protacted legal battle in which the tribunal awarded victory to Demola Adeleke of the People's Democratic Party and the appellant as well as the supreme court holds that Gboyega Oyetola of the All progressives Congress is the winner.

Whether or not the pronouncement of the courts is in tandem with the wishes of the people or a reflection of how they voted will be dependent on what bend anyone decides to take either sentimentally or emotionally so. After the decision of the supreme court, only the court of the conscience still subsides and it holds no place in law to make anyone Governor or otherwise.

The democratic critique of judicial review by constitutional courts has prompted its defenders to counter that courts have democratic qualities as good as, and in certain respects even stronger than, conventional democratic politics.

Constitutional courts operate as exemplars of democratic deliberation. In particular, they give expression to the public reasons underlying democracy and ensure democratic practice does not subvert its ideals. They also holds that rights-based litigation offers a form of democratic participation, providing a voice to those who might have been excluded from electoral democracy.

The Judges operate in a similar way to elected representatives, who are best conceived as trustees rather than as delegates.

Courts do possess certain limited democratic qualities. However, they are not intrinsic features of courts themselves. They arise from their being dependent upon rather than independent from the conventional democratic process.

The courts has often undermined democracy, particularly when it involves a strike down power and a claim to judicial supremacy, a position associated—albeit contentiously—with the Nigerian Supreme Court. So powerful is the court that even God can't change their verdict!

Democracy, understood as a procedure involving regular elections for competing parties, universal suffrage based on one person one vote, and majority rule, is held to provide a mechanism whereby all citizens can see they are treated as equals by virtue of having an equal say in making the collective decisions and rules that shape their common institutions and social interactions, albeit indirectly through their electorally authorised and accountable representatives in the legislature.

As such, this system meets the constitutional norms of fairness and impartiality by offering an instrument for ensuring public institutions and arrangements are committed to the equal advancement of the interests of those subject to them. It does so by treating the views individuals have about their own and their society's interests with equal concern and respect and constraining the pursuit of collective policies by the need for governments and the administration to take those views into account.

Democratic Patriots contend that courts cannot achieve this task as legitimately or effectively because the legal process lacks those features of the democratic process that allow citizens to define and protect their rights on an equal basis. Consequently, courts cannot show their judgments about the rights and rules governing our public lives avoid bias and respect the reasonable disagreements we have about them. This hasn't changed and may not likely change!

To avoid sounding Academical, again on OSUN, the supreme court has given a verdict and everyone have to abide with it.

Judicial review is justified as a counter-weight to potentially myopic, prejudiced, careless and occasionally tyrannous majorities and the democratically elected politicians who feel obliged to respond to their demands. Courts are said to avoid such problems through being isolated from the electoral process and independent from government interference. How independent the courts were on this regard and how it came about invalidating a process of election and the failure of a judge to be present in court in a matter that bothers on a process is what it will take a while to resolve.

Now that the kittens have come home to roost and the bookmakers now have a reference, it should be noted that the only way to forget the process is for the governor to make the ends worth it. Never again should it be said that the people suffers because of what they did or did not do.

Let it not be said that no impact is felt by the people in the perhaps the first four years of Gboyega Oyetola as the governor of OSUN state. It is time to make the people forget their agony and the reason so much number moved against the choice of the APC in the election.

Although not much will be expected to change since it is the same party and a continuation of a government by a former chief of staff, let the people breathe a new lease of life.

Let half salary not be remembered. Let poverty be banished. Let hunger take a flight. Let the schools now be schools and not some Quranic centres where same uniform is adorned. Let the government corridor now be opened to all well meaning people of the state and not some cronies who sees there as their ancestral family compound. Let the state media now speak as a media house and not some Church bell who announces nothing else than the time to worship THE GOD.

Let governance take root and not some dancing spree. Let it not be about the fortunate state boys who are untouchable but about the state men who has developmental idea to offer.

Let it not be about the beards but about the content of character.

Let it not be about mere compensation in appointment but about service delivery and competence.

May the spirit of the springs be a guiding light as the covenant of the Lord reigns supreme!

AYODEJI OLOGUN is a political analyst, a public speaker and a broadcast Journalist. He can be reached via [email protected]