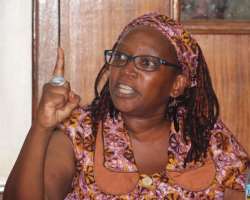 Mr. President, Elder Yoweri Musevni, kindly release Dr. Stella Nyanzi from detention. You do not have any moral basis of detaining Dr. Nyanzi. She is only a freedom fighter that fights by use of the poet’s weapon- the pen, just the same, way you were a freedom fighter using tools of the guerrilla- a gun. President Musevni, I believe you are aware that there is no freedom in Uganda. The fact that there is no internal strive among the people of Uganda does not mean that there is freedom in Uganda. The people are only living under your intimidation and hence they live under fear. It is fear that has kept them mum, not satisfaction. It is not your fault to lead Uganda into an abyss of Gestapo like police state. There is always a natural tendency for those in power to behave brutally. Ali A. Mazrui described this phenomenon as Sisyphus paradox. Of course, yes, Mr. Museveni, you are brutal; your Gestapo like state machinery evinces your brutality in effective muffling of electoral democracy and media freedom. Therefore, it is a blessing for you to have overtones of democratic pillars in the likes of Bobi Wine and Stella Nyanzi. Truly, good democracy is not possible without opposition. Hence, the timely presence of Dr. Stella Nyanzi in Uganda, a true input to African democracy, please take her out of detention and restore her back to her academic job at Makerere University.

Mr. President Musevni, it is illogical to counter poetry by violence, Mr. President, you are only acting live very many dictators in the past who attempted such irrationalities to muffle poetry and literature by violence, but they only goofed. Instead, they were condemned by the natural reality to the abyss of oblivion. But surprisingly, their victims received eternal bliss, they became elevated to the pedestals of the most worth of worthies; I mean Machiavelli is larger than the Medici, Galileo than the Pope, Mandelstam than Stalin, Cervantes than his jailers and finally by averring a piece of history from your home in Uganda, Okot P’ Bitek is larger than Idi Amin Dada. This is clear historical basis on which the future will enjoy un-fettered popularity of Dr. Nyanzi and Bobi Wine; your Gestapo tactics have only made them the beacons of art and freedom.

Mr. President, it is diabolical to keep sons and daughters of other people in detentions the way you are doing on Bobi Wine and Stella Nyanzi while at the same time you glorify your son Muhozi and your wife Janet, the two we all deem you are preparing to make them your successsors.No.Mr. President, Uganda will never be a Museveni Dynasty. The fact is this, the spiritual forces of fortune, fate and death will not allow you to propagate and implement your whimsical dreams to extent your state culture of Gestapo brutality to the future generations of Ugandans. Still, you can only avert wrath of the angel that stops dictators by allowing Ugandans to compete fairly in electoral politics. You can do this, by working on the appalling state of police brutality in Uganda, politically muffled judiciary, degenerated press freedom, roaring rural poverty, urban depravement, youth un-employment and social dumping of the illiterate young Ugandans into Kenya’s struggling labour market.

Mr President, I am writing to you in my capacity as an Eastern African citizen. Above all else, I am writing to you out of the intellectual respect I have for you. You are a glowing paragon of revolutionary intellect, revolutionary thought and Marxist praxis around East and central African region. You are a towering living example of class struggle, revolutionary struggle and armed struggle against the vapid whims and vanities of selfish-politics. Your weapon of theory against HIV aids as a capitalist anthropocene strategy to exploit the poor was exemplary; personally, I admire your erstwhile approaches to the problems of African politics; neo-imperialism and post-colonialism. Mr President Museveni, such Excellencies in your past life of struggle for freedom of the poor in Uganda need to uphold your focus on human dignity through freedom of speech. I mean a poem by Dr. Nyanzi could not remove you from power, but keeping her in detention makes you to lose your soft power. This is why the students at Kenyatta University held a public demonstration against your presence in Kenya during your last visit to Nairobi.

Mr. President Museveni please, I ask you not to be a life-long president of Uganda and do not plan to bequeath power to your son Muhozi. If you do that, it will be an impeachment to the dignity of Africa and its citizens in the international community. Time is over for Africa to persist as a hub of dictators, life-long presidents, un-ashamed panjandrums, political opportunists, juntas, military rulers, family dynasties and all other forms of political strong-manships. The trend has to reverse, and a person out there must take the plunge to be a leading example. Any eventuality of such like political spirit will obviously fine-tune African governance towards democracy, inclusivity, political trust, good inter-cultural relations, blossoms of art, breakthrough in science and dawn of the African day. It has to start with releasing of Dr. Stella Nyanzi from detention.