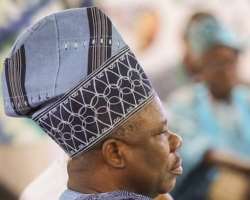 The Committee for the Protection of Peoples Mandate (CPPM), is shocked and saddened like millions of Nigerians and lovers of peace over the circumstances surrounding the hurried handover of arms and ammunition by the immediate past Governor of Ogun state, Senator Ibikunle Amosun to Mr. Bashir Makama, the Ogun state Commissioner of Police, some few hours to his exiting government house on the 28th of May, 2019 as published by Premium Times, an online news medium, on 24th June, 2019.

While it an indisputable fact that Nigeria is undergoing security challenges, which requires all hands to be on deck towards rendering support and assistance to ameliorate the problem of which this has been put to practice across the federation by organizations, individuals, groups and even state governments procuring arms, ammunitions and other necessary tools to aid the security agencies in the discharge of their responsibilities, this case of ex- Governor Amosun arms handover is worrisome and requires urgent interrogation by the federal government notwithstanding his status as a sitting Senator.

It's an indisputable fact that even when arms and ammunition are to be procured according to our laws and international regulations, the End-User Certificates are absolutely necessary to import controlled products into Nigeria and this Senator Amosun's arms and ammunition though procured with Ogun state tax payers funds, is liable of contravening this local and international policy unless proved otherwise with evidence from the office of the National Security Adviser (NSA).

It's a known fact that Ogun state prior to the 2019 general elections witnessed high-scale violence which resulted in deaths, including the killing of a police officer accompanying election materials from Ipokia Local Government, injuries and destruction of properties, of which accusing fingers were pointed in the direction of then governor Amosun as being, the hand of Esau but the voice of Jacob due to his desperation and threat of by-fire and by-force, to install his anointed successor to take over the Oke Mosan government house after his 8 years stint.

Unfortunately, the blame for Nigeria's security challenges, most especially election related violence, has been laid squarely at the doorsteps of politicians and this latest Amosun arms-gate has lent credence to the position of that school of thought, which demands that he be arrested and interrogated for the sake of our democracy and justice.

As it stands now, Senator Ibikunle Amosun arms saga is bedeviled by a number of questions requiring answers and some are:

1. Where were this arms and ammunitions procured from? We hope it's not from the black market whose proceeds is used to fuel crime locally and internationally, including illicit drug business?

2. When were these arms and ammunition procured?
3. What was the quantity procured and their specifications?

4. When was part of the government house Oke Mosan, converted to an armoury? The Ogun state ministry of works, housing and physical planning must be called to tender evidence.

5. According to security regulations, is the Senator Ibikunle Amosun armoury in Ogun state government house, a legally approved and recognized armoury by the Federal Government?

6. How possible was it for the Ogun state Commissioner of Police alone, out of all the security agencies heads in Ogun state, to be the only one invited to take possession of the arms and ammunitions?

7. If the above (6) is true, is it safe to assume that the Ogun state Commissioner of Police is an accomplice with Senator Amosun in this suspected breach of the laws of the land?

8. After taking possession of the arms and ammunitions from the Governor, did the Ogun state Commissioner of Police notify the Inspector General of Police (IGP) immediately and accordingly?

The silence of the office of the National Security Adviser (NSA) on this national security matter is worrisome and unacceptable.

Therefore, we at CPPM, demand the following:
1. Immediate arrest and interrogation of Senator Ibikunle Amosun and prosecution if he is found wanting of abuse of office and breach of the laws of the land.

2. Immediate arrest and interrogation of the receiver of the arms and ammunitions in person of Mr. Bashir Makama, the Ogun state Commissioner of Police for his suspected complicity.

3. An official statement from the office of the National Security Adviser (NSA) on this violations and threat to national security.