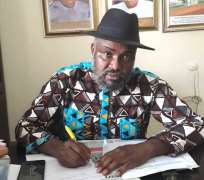 The basic tenets of good governance and constitutional democracy are embedded strategically in the Nigerian version of the text known as the oath of office by the president of the Federal Republic of Nigeria. These essential elements of constitutionalism are fundamentally obligatory and the moment the holder of this high office deviates from them, it can be assumed to be a grave threat against constitutional democracy.

So help me God.”
For most constitutional purists, the most underlying element of this salient aspect of the grund norm is the obligation by the president to do the right thing at all times to all manner of people and not to subject official policies and conducts under the pedestrian prisms of ethno-religious interests of the holder.

This obligation is sacrosanct, inviolable and indispensable.

Any violation of this sacred code can as well be described as a coup plot against the constitution and must never be tolerated due to the inevitable fact that its endurance in the body polity could precipitate anarchy, doom and monumental disaster to the Fatherland.

The Encyclopedia Britannica tells us what Coup d'état is. It says that "Coup d’état, also called Coup, is the sudden, violent overthrow of an existing government by a small group. The chief prerequisite for a coup is control of all or part of the armed forces, the police, and other military elements. Unlike a revolution , which is usually achieved by large numbers of people working for basic social, economic, and political change, a coup is a change in power from the top that merely results in the abrupt replacement of leading government personnel."

The scholars offer more exposition on the concept of coup as follows: "A coup rarely alters a nation’s fundamental social and economic policies, nor does it significantly redistribute power among competing political groups. Among the earliest modern coups were those in which Napoleon overthrew the Directory on Nov. 9, 1799 (18 Brumaire), and in which Louis Napoleon dissolved the assembly of France’s Second Republic in 1851."

They recall that Coups were a regular occurrence in various Latin American nations in the 19th and 20th centuries and in Africa after the countries there gained independence in the 1960s.

Why is it necessary that we dwell extensively on the essence of good governance, constitutional purity and the import of the concept of coup?

These issues are key to a detailed analysis of the needless controversy called Ruga Fulani settlements which remains an aggressive attempt to force down the throats of unwilling states and worst still, deploy public fund to execute private business interests of an ethnicity as against the OATH OF OFFICE OF THE PRESIDENT. This in short is another way of explaining coup plot.

The tepid argument made by the presidency in defence of this highly disputed policy goes to show that the officials exercising the functions prescribed in the constitution in section 5 are either bereft of the faintest idea of what the mandate of their executive office is or they are bent on carrying out what can be described as a coup against the constitution.

The desperation exhibited by the presidency populated majorly by Hausa/Fulani-born officials goes against the basic norms and tenets of constitutional democracy and amounts to a desecration of the constitutional oath of office administered on president Muhammadu Buhari who is obliged by law to exercise his office as the president of all Nigerians and not of his ethnic group which is Fulani.

One of the most respected legal scholars of our time, Dr. Tunji Abayomi clearly spells out in his authoritative book titled “Constitutional powers and duties of the president”, that a holder of the office of the president of Nigeria must never use his office to elevate his personal, ethno-religious interests over and above the corporate interests of the collective because the people of Nigeria are the owners of the sovereignty of Nigeria.

It is doubtful, he says, if he can be deemed duly elected under sections 133 and 134 if he has no negative votes cast against him.

The effect of the provision he affirms, is that negative votes against the president and are thus protected. If, as it observed, such votes are protected, any prejudice or penalty against them will clearly be inconsistent with the exercise of executive powers of the Federation.

Dr Abayomi noted that It is not just that the nation is recognized as one constituency for the election of the president under section 132(4), but the president’s responsibility to all the members of that constituency is by the provision of the section not only inherent, but also required.

The simple truth is that the push by president Buhari to carry on with the implementation of this discriminatory policy of establishment of Fulani communities all across Nigeria fundamentally breaches the constitution, the Land Use Act of 1978 and can best be described as an attempt at forceful land grab similar to a coup d’état.

R. K. Sapru in his book “Public Policy: formulation, implementation and evaluation”, provides us with empirical proof to draw up a conclusion that the policy on setting up Ruga Fulani all across Nigeria does not qualify as public but a selfish policy which is inherently unconstitutional.

Writing on the idea of public vis-à-vis the concept of public and policy, the aforementioned scholar stated as follow: “It is first important to understand the concept of ‘public’ for a discussion of public policy. We often use such terms as ‘public interest’, ‘public sector’, ‘public opinion’, ‘public health’, and so on. The starting point is that ‘Public Policy’ has to do with those spheres which are so labeled as ‘public’ as opposed to spheres involving the idea of ‘private’. The concept of public policy presupposes that there is an area or domain of life which is not private or purely individual, but held in common. Public dimension is generally referred to ‘public ownership’ or control for ‘public purpose’. The public comprises that domain of human activity which is regarded as requiring governmental intervention or common action. However there has always been a conflict between what is public and what is private.”

“W.F. Baber argues that the public sector has ten key differences from the private sector:

I. It faces more complex and ambiguous tasks;
II. It has more problems on implementing its decisions;

III. It employs more people with a wider range of motivations;

IV. It is more concerned with securing opportunities;

V. It is more concerned with compensating for market failure;

VI. It engages in activities with greater symbolic significance;

VII. It is held to stricter standards of commitment and legality;

VIII. It has a greater opportunity to respond to issues of fairness;

IX. It must operate or appear to operate in the public interest;

X. It must maintain minimal levels of public support above that required in private industry.”

However, the good thing about the national conversations around the theme of the illegality of forcing down our throats the concept of Ruga Fulani settlements is the ability of most Nigerians to easily decode the lies hidden in the entire scenario which are now manifesting.

One of such lies already exposed is that the setting up of Ruga will not benefit any other Nigerian but Fulani since Ruga inherently implies Fulani settlement. The big lie that the policy is meant for livestock farmers is an egregious falsehood that is now self-evident. My mother is a livestock farmer and does not require Ruga settlements for her private business at government expense.

Professor Godwin Sogolo, a philosopher once wrote about the journey of such lies to self deception in his iconic article in The Guardian “From lying to self-deception” and a meticulous reading of this December 4th1986 publication of The Guardian newspaper tells contemporary observer that Ruga Fulani settlement as being packaged and propagated is a progressive journey by the presidency from lying to self-deception.

Hear him: “Fortunately, the world is not like that. Our world allows some intrigue; we are able to lie without being detected; we can trick, cheat and deceive others; better still, we can deceive ourselves. So, to some extent each of us wears a mask of false life, some thick enough to shield completely the real self. We always pray that the mask does not slip, although if it does, some would find it more difficult than others finding where to hide.”

“The problem with lying is that a small bit, once told, always demands coating. And for the fear that the new layer would wear out we put yet another plaster and so on and so on until we find ourselves totally engulfed in a false life”.

This journey of progressive lies about cow colonies to the self deception of Ruga settlements is now a Notorious lie.