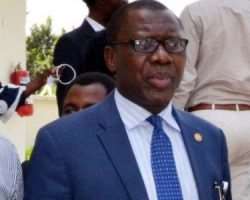 TheCable reports that Nnadi was taken into custody on Monday.

As presidency source confirmed Nnadi's arrest to TheCable, saying he is being investigated for “breach of civil service rules, corrupt enrichment and abuse of office”.

He added that the entire PEF management team is also being investigated.

TheCable had reported how Greatwood Hotels Limited established in Owerri, Imo state, in 2015, was traced to Nnadi. His bank verification number (BVN) was linked to the hotel's account at Guaranty Trust Bank (GTB).

“He was arrested over allegations of corrupt enrichment, living beyond his legitimate earnings and abuse of office,” the official said. The hotel linked to Nnadi
“So far investigation has revealed more than three (3) accounts in Standard Chartered Bank Limited where he has more nearly N2 billion as well as huge amounts in several foreign currencies in the same bank.”

“The panel has also discovered 49 companies which have been steadily transferring monies into his accounts.”

'BREACH OF CIVIL SERVICE RULES'
The Public Service Rules which guides the conduct of public officers in the country states that while these officers are not prohibited from holding shares in both public and private companies, “they must not be Directors in private companies.”

Its section four (030424) further states: “(b) A public Officer, whenever required to do so by his/her Permanent Secretary/Head of Extra-Ministerial Office, shall disclose within three working days, in confidence, full information about any investments held by him/her or his/her immediate family whether held in their own names or the names of other persons or otherwise.”

In subsection 030425, it adds that “in accordance with the provisions of the Regulated and other Professions Private Practice Prohibition Act, (Cap.390) Part II, no officer shall engage in private practice. However, exemptions shall be granted to private Medical Practitioners and Law Lecturers in the Universities.”