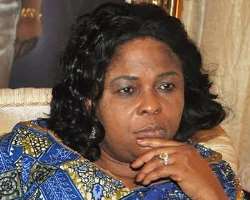 Justice Mojisola Olatoregun of the Federal High Court sitting in Ikoyi, Lagos ordered the final forfeiture of the sums of $8,435,788.84 traced to the wife of former President, Goodluck Jonathan, Patience.

The Court ordered a final forfeiture of Patience Jonathan’s $8.4m which amounts to N9.2bn to the Federal Government.

The court had on April 19, 2018, made an order of interim forfeiture of the various sums of money, following an ex-parte application filed by the Economic and Financial Crimes Commission, EFCC, against Jonathan and some companies.

In granting the interim forfeiture order, Justice Olatoregun had ordered the EFCC to publish the order in a national newspaper for the respondent or anyone interested in the money to show cause, within 14 days, why it should not be permanently forfeited to the Federal Government of Nigeria.

Following the publication of the interim forfeiture order, the EFCC, through its counsel, Rotimi Oyedepo, had, on October 29, 2018, moved a motion for the final forfeiture of the money to the Federal Government.

Dissatisfied with the ruling of the trial court, the first respondent, Jonathan, through her lawyer, Ifedayo Adedipe, SAN, had approached the Court of Appeal, Lagos Division, seeking an order to set aside the interim forfeiture order of April 19, 2018 granted to the EFCC by Justice Olatoregun.

Her appeal, however, was subsequently dismissed by the Court of Appeal in Lagos.

In an attempt to claim ownership of the money, the former First Lady also approached the Supreme Court to set aside the judgment of the appellate court.

However, the apex court, on March 8, 2019, upheld the interim forfeiture of the funds.

A five-man panel of the apex court led by Justice Dattijo Muhammad, in a unanimous decision, refused to set aside the order of temporary forfeiture of the sums of money issued by the trial court.

The apex court held that the Court of Appeal, Lagos Division, was right to have affirmed the forfeiture order.

Delivering judgment today, Justice Olatoregun held that the money was reasonably suspected to be proceeds of crime.

The Judge also held that: “There is no reason provided in the affidavit to convince the court or to show cause why the monies should not be forfeited to the Federal Government of Nigeria.

“There is no evidence to reasonably show, beyond doubts, that the monies were legitimately earned.”

Justice Olatoregun, therefore, granted the EFCC’s application that the money should be permanently forfeited to the Federal Government.