Every Nigerian In Kano Is An Indigene, Declares Emir Of Kano 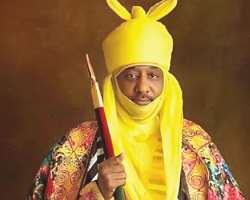 The Emir of Kano, His Highness, Muhammad Sanusi 11 on Sunday declared that there is nothing like non-indigeneship in Kano, insisting that everybody residing in the ancient commercial city remain a bonafide indigene irrespective of ethnic, cultural and religious background.

The Emir who spoke during the 10th anniversary/Ofala 2019 festival of Eze Ndigbo Kano, His Royal Highness, Chief (Dr.) Boniface Ibekwe, held at Ado Bayero Square, Sabon Gary, noted that, “the wealth and prosperity of Kano is based on its ability as a cosmopolitan city.

“For us in Kano, whether you are Nope, Yoruba, Igbo, Kanuri, Muslim, Christian, if you identify yourself as a son of Kano, you are from Kano.

“Religion of Islam expressly prohibit tribalism. The Qu’aran is very clear on this issues. Allah says all mankind were created from one man and one woman (Adam and Eve). We made you as a people from different tribes so that you can recognize each other. The best of all among you is he who fears God.”

The Royal Father expressed happiness that since he assumed the throne as the Emir of Kano, “there has not been any ethnic clash. i want us to pray that the peace we are enjoying today shall continue; and in other parts of the country where we are experiencing ethnic clash and other problems of insecurity should also have peace.”

Emir Sanusi maintained that Nigeria is designed by God to have unity in diversity, adding that, “I urge everyone of you to build friendship across ethnic and religious divides and also maintain that friendship. “It is the wish of Allah that Nigeria has many ethnic and religious groups. We should maintain peace and live in peace. Many of you here today were born in Kano, your parents were also born here in Kano. So, who can come and tell you that you are not an indigene? We are all one and we should live together as brothers and sisters.”

Emir Sanusi also used the occasion to appeal to Igbo leaders in Kano to file themselves behind one leader, pointing out that, “once a leader is recognized, you are obliged to accept his leadership.

“The leader is a father of everybody and the leader should in turn accept everyone and be a father to everyone.”

Ganduje who was represented by the Head of Service, Dr. Kabiru Shehu recalled that his administration engaged in massive investigating development and healthcare delivery in Sabon Gari during his first tenure and promised to continue with the kind gesture.

He commended Igbos and other ethnic nationalities resident in Kano for living in harmony with their host community as promised to use every available apparatus at his disposal to maintain the peace and harmony being enjoyed in the state since his administration.

Eze Ndigbo in Kano, Chief Ibekwe commended Governor Ganduje and Emir of Kano for ensuring peaceful co-existence in Kano and promised to use his good office to appeal to Igbo and other ethnic nationalities resident in Kano to maintain peace.

Highlight of the event include award of Chieftaincy title to the Divisional Police Officer (DPO) of Normansland/Salon Gari police division, SP Hassan as the Ekwueme 1 of Igbos in Kano.

The occasion was well attended by all the Ear Ndigbos in the 19 northern states and other Royal Fathers from the South-East.