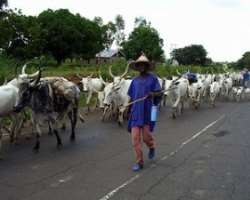 The Federal Government originally planned to have the controversial Ruga settlements in every part of the country and not only in 11 states.

But the Chairman of Nigeria Governors Forum and Ekiti Governor, Dr. Kayode Fayemi, said the Ruga initiative had been blown out of proportion.

He, however, said no state would be forced to surrender its land to the Federal Government for the project.

There are strong indications on Saturday that members of the main opposition party, the Peoples Democratic Party, may call for the investigation into the Federal Government sponsored Ruga projects for Fulani herdsmen across the country.

SUNDAY PUNCH learnt on Saturday that funding arrangements, as well as other things that would ensure a seamless operation of the settlements, were still being discussed.

Senior officials of the Federal Ministry of Agriculture and Rural Development, who had earlier given one of our correspondents the names of states where the settlements were currently being perfected, stated that the affected states and the Federal Government were still discussing many other issues about the settlements, including funding.

The source said, “Generally, it is a policy conceived by the Federal Government to cover the entire country. But the government decided to discuss it with the states and said states that are willing should indicate interest.

“But we are surprised at the political undertone that this issue is having. Why will a group from Benue stage a protest that government wants to invade their land?”

Umar also said the state governments that indicated interest had been visiting the ministry to get details about the initiative, as discussions were still ongoing to perfect the scheme.

He said, “Already state and local governments are buying into the initiative. Many states have indicated interest. They have been coming to the ministry and stated their interest to join to ensure that we set up Ruga settlements in their states so that their nomads will have a place. They will also have cattle markets and modern abattoirs in their states.”

On May 21, 2019, the immediate past Minister of Agriculture and Rural Development, Chief Audu Ogbeh, announced that Buhari approved the Ruga settlement initiative earlier in the same month.

Ogeh said, “Just 10 days ago President Muhammadu Buhari approved a programme called the Ruga settlement. We are going to build settlements where herders will live, grow their cattle and produce milk. The milk will be bought by a milking palour thus preventing their wives from moving around with milk. This is especially to avert any conflict between the herders and the farmers.”

No state can be forced to surrender land, says Fayemi

Fayemi, while responding to an inquiry from one of our correspondents via a text message, said the initiative had nothing to do with the NGF, stressing that issues surrounding land use were at the discretion of respective governors.

He said, “The so-called Ruga initiative has nothing to do with NGF. We have never discussed this and none of my colleagues has raised the matter in my period in office.”

Fayemi said no state could be forced to surrender land within its jurisdiction and as such there was no cause for alarm.

The governor added, “I don't believe any state is under threat of its land being taken over for this purpose. Governors have exclusive preserve over the land within their states jurisdiction. This is a storm in a teacup.”

PDP senators to demand probe
Some PDP senators who spoke with SUNDAY PUNCH on Saturday on and off record condemned the involvement of the President Muhammadu Buhari led administration in such project.

They described as unfair any action by the Federal Government to take over other people's land for the establishment of herdsmen settlements with billions from the national treasury, promising to initiate probe into the project.

The PDP member representing Ondo Central Senatorial District, Senator Ayo Akinyelure, one of told our correspondents in a telephone interview on Saturday that the project ought to be investigated.

He said, “We have to study the provisions in the 2019 budget and see whether the Fulani herdsmen settlements projects were adequately captured in it. We will know what to do if the project was captured in the budget or not. But definitely, we should look into it.”

Meanwhile, the Federal Government has allocated the sum of N2.26bn in the 2019 budget for the development of national grazing reserves.

The amount is contained in the 2019 budget signed into law by the President on May 28.

Specifically, the N2.26bn is contained under the budget of the Ministry of Agriculture and Rural Development.

Based on analysis of the 2019 budget of the ministry of agriculture, there is no specific amount captured with the nomenclature of Ruga settlement.

However, there are other budgetary provisions made for various agricultural projects such as N2bn for support of infrastructure projects and coordination services

Also, some members of the House of Representatives expressed reservations about the project.

One of them, Mr Nicholas Ossai from Delta State, who spoke with SUNDAY PUNCH on Saturday, asked the Federal Government to establish agricultural projects in the geopolitical zones based on what they produce.

He said, “I think the Federal Government should start from the North. They should start from Sokoto, Katsina, Zamfara, Kano, Kaduna, Yobe and Borno states as a pilot programme. The people — Hausa/Fulani — are indigenous to these areas but they are not indigenous to the South. They should be able to localise the people based on their way of life rather than spreading it to all parts of the country. That is what they should do.” Punch