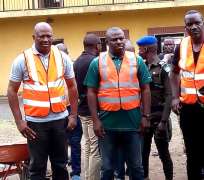 Deputy Governor of Imo State, His Excellency, Rt. Hon. Gerald Irona, weekend, assured people of the state that the government under the leadership of Governor Emeka Ihedioha would return Owerri to its former status as the cleanest city in Nigeria, even as he lauded the efforts of the Director General of Imo State Environmental Transformation Commission (ENTRACO), Alex Emeziem for what he described as his superlative performance.

He gave the assurance after monitoring the environmental sanitation exercise held in the state, saying that it was in line with the Go-Green-Stay Clean policy of the state government.

“We moved round the city and we saw the people cleaning their surroundings. We are impressed with that and we want to support the ENTRACO DG and his team to keep Owerri clean and regain its past glory as the cleanest city in the country”, he assured. Deputy Governor and his team observing a Sanitation Mobile Court in Owerri during the Inspection.

“You can see the heaps of refuse around and people live around here. I think the Director General of ENTRACO and SA to the Governor on Sanitation would evolve a radical approach to reducing the level of indiscriminate dumping of refuse. For now, there are designated areas where inhabitants dump their refuse. But, I think we can go beyond that by introducing refuse bins which would be stationed at strategic places so that government agents would come around and evacuate them, instead of dumping them indiscriminately”, he said.

“This is a very clear departure from what we inherited, where people were not even aware that they ought to observe the sanitation day. But with the coming on board of the ENTRACO DG and the level of sensitization that has been carried out, you would agree with me that we witnessed high level of compliance. It was commendable.”

Highlight of the inspection was the Deputy Governor’s observation of a Mobile Court, where persons accused of violating sanitation regulations were tried.

Walter Duru, Ph.D is Adviser, Communications to the Deputy Governor