Cosmos Maduka: From Dropping Out Of School At Age 3, To Street Hawking, To $500m Personal Net Worth 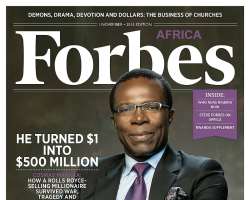 Life turned out to be miserable for Cosmas Maduka at the age of 4, when his father who was the bread winner of his family, transited to the great beyond. The world became a weird world, a heartbreaking world, and a troublesome world. He was not sure of whom to run to for help in their abject paucity.

“I withdrew from primary school at form 3 at the age 7 because there was no money anywhere to continue with my education,” he said.

But Maduka did not withdraw from the school to mooch in the streets of the dusty town of Jos, Plateau State; he rather started assisting the mother in a modicum business of baking and hawking Akara (Bean cakes) in the street. He was scorched by the severe sun and experienced extreme cold correspondingly. His dint of hard work however won him the admiration of people that included one of his relatives. He was 9 at this time.

His uncle brought him over to Lagos State at 12, to learn how to trade in automobile parts, but this did not help matter, either. The uncle’s shop that was situated at No. 88 Griffith Street, moderately close to Oyingbo Bus Stop, became Maduka’s abode. He would sleep in the shop at the end of any day’s business – sharing space with the automobile parts.

At the age of 14, his uncle gave him a responsibility of travelling from Lagos to Nnewi in Anambra State, a journey of 9hrs by road, to make purchase of auto parts for him. He played the same role to Sokoto State. But one day, something appalling happened and added to Maduka’s bunches of travail: His uncle estranged from him, an act that caused Maduka his apprenticeship.

Maduka’s sin was that he attended a programme that was hosted by a church without the consent of the uncle; hence his uncle was irked, because the church programme created a chasm in Maduka’s attendance to his daily duties at the shop. However, his uncle gave him N200 (an amount that is not upto $1 in today’s currency market) as a settlement.

“My uncle gave me the money and said that I should go and concentrate in my church programme,” Maduka said.

Maduka was bemused that upon the loyalty and legerdemain he had invested in serving the uncle, all that the uncle could give him was N200. He therefore nitpicked bitterly, especially to people who cared to listen to him. Although, Maduka later found solace in the uncle’s words to him, saying, “Cosmas, even if I didn't give you money, I believe you will succeed.”

That was the blessing every of Maduka’s ilk would want from their boss. The uncle, at least, blessed him. Conversely, life was not easy for Maduka (and had never been) even though that N200 was regarded as huge money as at the time he was unceremoniously settled. Maduka later founded an auto spare parts company with a business name as Maduka Brothers. Nevertheless, he closed shop within a short period and moved on in search of a proverbial green pasture. Not even a business he founded with the brother survived. Their different views to the business compelled them to part.

Turning Point
Born to Mr. and Mrs. Peter and Rose Maduka from Nnewi, Anambra State, Nigeria, in Jos on December 24, 1958, Cosmos Maduka later hit the goldmine when he teamed up with a friend called David Nwosu, after he fell apart with his uncle, brother and closed shops. Nwosu and he founded CosDave Motors – a company they contributed N5, 000 each to structure.

Their coalition yielded a whopping sum of N300, 000 in capital as they worked very hard by 1978 and by 1980; they had over a million naira. Still, Nwosu and Maduka could not continue with their grouping; they parted ways in 1981, on flimsy excuses of ideology. But by providence or hard work Maduka had a destination in mind. By 1982, he incorporated Coscharis Motors: A coinage of his first name and Charity, his wife’s name.

His business skyrocketed and Coscharis (Coscharis Motors Limited) was noticed by the Ministry of Trade, Nigerian Government. In that year, very few companies had import licences. “And Nigeria was almost grounded that whatever that one brought in the country could be sold at maximum profit. It was a seller's market. It was like money doubling. That was where he made money to prepare the base and foundation of the today’s booming Coscharis Group,” business analysts have said.

With numerous branches in motor sales around Nigeria, Coscharis also has branches in African countries like Ghana, Gabon and Cote D’Ivoire in the areas of ‘Automobile, Medical, Foods & Beverages, Information Technology, Engineering and Agriculture’. In 2016, Coscharis motors was, apart from being the major automobile merchant in Nigeria, it’s also the only confidential distributor of BMW automobiles in the country.

According to an interview with Forbes Africa 2015, Maduka has a personal net worth sitting in excess of $500 million (US dollars) and moving on. But looking back to when he was an Akara seller in Jos, shared sleeping space with auto spare parts at his uncle’s shop in Lagos and sundry, Cosmas Maduka who has 5 children would say, “As a Christian, the gift and the calling of God are without repentance. Many of us are born as we are into the world but we can also improve on what we are destined to become by sheer hard work and dedication."

Disclaimer: "The views/contents expressed in this article are the sole responsibility of the author(s) and do not necessarily reflect those of The Nigerian Voice. The Nigerian Voice will not be responsible or liable for any inaccurate or incorrect statements contained in this article."
Articles by Odimegwu Onwumere
4-2-2019  February 4 2019: Nigeria: Illegal Taxation Continues Despite Several Moves By Authorities To Halt Pe9-5-2017  Apparition21-4-2017  When Health Insurance Becomes Unattractive In Nigeria14-4-2017  Killed For Freedom13-12-2016  Finally, Belarus Gets Culture CodeMore...