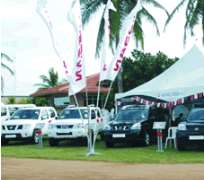 Vehicles on display
In a show of might, the CFAO Group, owner of Chevrolet, Nissan, Renault, Mitsubishi, Florid and Great Wall franchises, recently staged its own exclusive motor show on Victoria Island, Lagos.

The event, which had on parade all the auto franchises and brands under the CFAO Group, presented an opportunity for existing and intending vehicle owners to have a firsthand interaction with brand owners and dealers, and also gave an opportunity for automobile chiefs to give insights on some of their products.

All the four companies under the group were pleased to showcase their brands. According to Graham Lowe, the Chairman of the organizing Committee and Managing Director of NMI Intermotors 'The idea of the CFAO Motor show was conceived earlier this year. The plan was to organize a show where all the brands would be exhibited in one location. However, June 5 and 6 2010, CFAO set out to accomplish its goals. And for two days, we are holding the city of Lagos spell bound as we showcase different models under our brand names'.

'This event was indeed a milestone in the CFAO Group's attempt at projecting its automotive division as an autouto 'distributor for the discerning consumer. We are staging the Auto Show to showcase our strength as a group in the auto business since the group can boast of ten brands. It is also important to note that this is one of the group's ways of reacting to the rapidly changing global and local economic climates.

In his comments in a chat with the press, Darren Robinson, General Manager Operations, CFAO Motors, disclosed that the essence of the event was to present the company as a one-stop auto shop, where the needs of customers would be met with relative ease. Besides, he explained that given the prevailing economic recession, 'We have come together to create a synergy among our group, which would improve our operations,' Robinson explained.

Pavir Singh, Managing Director, Alliance Autos, agreed that the event was a reaction to the prevailing financial crisis as no company can afford wastages anymore. 'We are just trying to show the changing face of the company with this event; it is a consolidation exercise', Singh said. Alliance Autos, he explained, has also redefined its operations to deliver better quality service to its customers and the market. The company, which trades in Nissan and Renault brands, the MD said, is set to further consolidate on its Renault brand as it is presently conducting a thorough check to get the right Renault product models for the market.

He expressed his delight at showcasing his brands at the auto show. He told reporters at the parley that the show was a success and indeed an eye opener, which according to him has enabled the company to meet with new customers who had little or not an in-depth knowledge about the brands under the dynasty's stable.

Also speaking, Graham Lowe, Managing Director, NMI/Intermotors, said he was impressed with the turnout of visitors to the event. Although he was yet to get the total figure of visitors to the exhibition, Lowe maintained that 'though there has not been a rush of visitors, but there is a steady flow; we have seen good quality of visitors which is better than what we get from attending general auto show'. His submission may not be faulted given that Intermotors recorded on the spot sales and several enquiries which ultimately may translate to sales.

Tor Idris Siyaka, project manager, Asian Hall Cica Nigeria Limited, the newest addition to CFAO Automotive Group,the show could not have come at a better time as it afforded great exposure to his brand of automobiles. He said the series of enquiries about his product, like the Florid, a 1.3 litre engine car, gave him satisfaction. 'It is our first time in an auto show and we are proud to be here; we are also proud to be under the umbrella of CFAO Automotive Group, he saidIndeed, to many a visitor, the array of vehicles on display at the exhibition underscored the position of CFAO Automotive Group as the leading warehouse of automobiles of choice.

A banker who was at the venue on the day it all ended (Sunday), expressed satisfaction with the exhibition. For him, the presence of all the brands in a single show presented him an opportunity to make a good choice in buying a car. 'CFAO Automotive Group is a trusted name in automobiles; so, this outing is a further confirmation of their innovativeness,' Eze said.