On the Buhari’s revenue philosophy 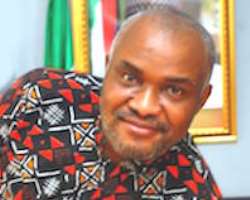 The current president Muhammadu Buhari unveiled what he considers a sustainable economic blueprint which in his words, if meticulously implemented and followed through in this his last tenure, is capable of unleashing tremendous national wealth which if equitably re-distributed is capable of jump starting one hundred million Nigerians out of poverty.

Mind you, that figure of one hundred million was about the same number of our citizens that the world's poverty clock affirmed that they recently migrated from mere state of poverty to absolute poverty, thus transforming Nigeria negatively to the infamous global poverty capital of the world and by far outstripping India.

It must have been this mindset that quickened the long delayed inauguration of a professionally competent governing board of the country’s premier revenue mobilization agency- the Revenue Mobilization Allocation and Fiscal Commission.

President Muhammadu Buhari took politics aside when he frontally charged his newly constituted and inaugurated council of revenue commissioners and the chairman Engineer Elias Mbam to hit the ground running and to work out implementable formula not only for revenue sharing amongst the three tiers of government but to bake bigger national cake by checking all revenue leakages in Nigeria so Nigeria’s road to national wealth and prosperity begins in earnest with the migration of 100 million absolutely poor Nigerians to the high way of wealth and productivity.

No doubt, the arduous tasks for this board is well cut out for them and there is no honey moon for these sets of Nigerians who come from diverse backgrounds.

The President said it was his pleasure to swear into office, the Chairman and Commissioners of the Revenue Mobilization, Allocation and Fiscal Commission.

Buhari then reminds them that as a Commission, the council members are empowered by the Constitution to among other duties: Monitor the accruals to and disbursement of revenue from the Federation Account; Review, from time to time, the revenue allocation formulae and principles in operation and advice government on the need for any changes; Advise the Federal, State and Local Governments on fiscal efficiency and methods by which their revenue is to be increased; Determine remunerations appropriate for Political/Public Office Holders; Make recommendations and submit findings by a report thereto to the government of the Federation or of the State, as the case may be, regarding the formula for the distribution of the Federation Accounts and the Local Government Accounts; and

They are to also discharge such other functions as may be conferred on the Commission by Constitution of the Federal Republic of Nigeria, this Act, or any other Act of the National Assembly.

The President minced no words to tell them that the mandate of the Commission is very wide and has an important role for our country’s economy. The Commission must be fair and just to the three Tiers and Arms of Government without compromising its core mandate.

He spoke further: "In my speech on June 12, Democracy Day, I informed Nigerians that this administration has laid the foundation for transforming our country and liberating our people from the shackles of poverty by putting policies and measures to integrate our rural economies to the national economic grid."

He opined that one measure is to extend credit facilities currently available to be able to encourage and support domestic production of basic goods and reduce our reliance on imported goods.

In the heading of this piece i alluded to the concept of a revenue philosophy of President Muhammadu Buhari's administration. The President offered a detailed explanation of his revenue philosophy when he asserts thus: "I set a target for our country to lift 100 million Nigerians out of poverty in ten years. This commitment is to further challenge the Revenue Mobilization, Allocation and Fiscal Commission to rise to its constitutional responsibilities and mandate."

He gave them the charge as follows: "Your appointment as Chairman and members of the Commission was carefully considered based on your proven track records of hard work and integrity. It is, therefore, the expectation of Government that you will rapidly and systematically set to work to address all areas of your mandates in a businesslike manner. Here I will charge the Chairman and Honorable Commissioners as to: Concentrate more on expanding the sources of revenue to the Federation Account and other non-oil sources including solid mineral; Use all legal ways and means to strengthen its monitoring mechanism and block leakages of revenue from the Federations Account. All relevant laws and regulations on revenue collections and remittances should be fully complied with and appropriate sanctions visited on defaulters.

He assured that government will continue to provide all the necessary support that will facilitate the achievement of the agency's constitutional mandate.

"I, therefore, use this medium to call on the National Assembly to enact relevant enabling laws that shall guarantee the Commission the legal ability to ensure that defaulters of revenue laws are appropriately sanctioned."

Salutary as these words sounded, evidences abound in the last four years to show that it is easier said than done. There are stark realities that those who were charged with critical duties of generating national revenues such as Customs/Immigration; NNPC and even the Federal Inland Revenue board have become deeply entrenched in corrupt practices and serial theft of public fund. This new board must shine their eyes to catch these executive thieves. Another aspect is the poor regulatory oversight on the remuneration and allowances of public office holders.

President Muhammadu Buhari I am sure is aware of the raging controversy near him between his anti-corruption adviser professor Itse Sagay and the brand new senate president Ahmed Lawan which centers around the jumbo payments that law makers earn per month.

Senator Lawan must be thinking that 200 million or so Nigerians are bereft of functional thinking faculties so much so that they may have forgotten the explosive revelations made not too long ago by senator Shehu Sani who told the bewildered nation that each senator pockets at least #15 million per month.

So senator Lawan thought he could tie a wool of confusion around our eyes by telling us that he earns just #750,000 per month.

The presidential adviser professor Sagay wouldn’t have any of those political untruths or poorly packaged and delivered propaganda from the senate president and he shot back at him to stop lying.

It was less than two days when this controversy started that the presidency inaugurated the Elias Mbam – led Revenue mobilization, Allocation and Fiscal commission who initially were appointed over a year ago.

Another salient development is the effort been spearheaded by Buhari to introduce fiscal autonomy in the states and local councils of Nigeria. All, these critical issues couldn’t have evolved at the right time than now with the commencement of work by new board at the Revenue Commission.

It is right to state that the philosophy of president Buhari’s revenue drive is centered around the tripartite thematic concepts of baking bigger national cake, stopping leakages of revenues and granting appropriate fiscal autonomy to states and local council administrations. These three issues are mutually and profoundly beneficial in the long run.

The straight forward presidential charge to the new board to block revenue leakages can be better understood if we read through a researched paper by Casmir Anyanwu who in the year 2011 found that following disturbing trends in the revenue generation status of the federation.

“The manner of management of revenues collected by certain Government Miniseries; Departments and Agencies has been a source of contention and appears to be offensive to the practices of section 162(1) of the 1999 constitution of the Federal Republic of Nigeria. It provides that “The Federation shall maintain a special account to be called "the Federation Account" into which shall be paid all revenues collected by the Government of the Federation, except the proceeds from the personal income tax of the personnel of the armed forces of the Federation, the Nigeria Police Force, the Ministry or department of government charged with responsibility for Foreign Affairs and the residents of the Federal Capital Territory, Abuja”.

Typical examples of such parastatals and agencies are NNPC, NPA, NIMSA, Shippers Council etc. under this scenario, certain basic questions need to be asked. There is the need for RMAFC to carry out a thorough evaluation of these practices through the dictates of the law to ensure that revenue accruals into the Federation Account are improved. I subscribe to this charge absolutely.

The last session of the national assembly spent quality times to investigate the NNPC which has become a cesspool of corruption.

The Nigerian National Petroleum Corporation it would be recalled has persistently been enmeshed in one controversy after another and the last one was over an alleged oil deal in excess of N91tn that may have been lost by the country.

In the deal, which was a subject of investigation by the House of Representatives Committee on Petroleum Resources (Downstream), a Chinese firm, Hungbohai Petrochemical Industry Limited, is alleged to have approval to lift over 80 trillion metric tonnes of Low Pour Fuel Oil from Nigeria for 35 years.

The panel, chaired then by a member from Ondo State, Mr Joseph Akinlaja, heard that Hungbohai commenced lifting of the LPFO since January 27, 2016.

While Alkhairi Oil was said to be the NNPC’s agent, the panel was informed that Mahat Oil signed as the representative of Hungbohai in Nigeria.

The House had mandated the Akinlaja panel to probe the matter after a consortium of law firms and the Chambers of O. J. Onoja (SAN) petitioned the legislature to raise the alarm that Nigeria was being “short-changed in excess of N91tn.”

The House was told that the consortium blew the lead over the deal after its client, Alhaji Ahmad Bamali, an interested party, uncovered the shady nature of the transaction and the “overall implications for the nation’s economy and generations unborn.”

The representative of the consortium, Mr Bola Aidi, while making a submission to the panel at the National Assembly recalled how the Economic and Financial Crimes Commission began investigating the case but allegedly later retreated because of the powerful forces involved in the deal.

However, the NNPC did not appear at the hearing on but wrote to ask for another date and denied the existence of the transaction.

Aidi stated that the petitioners were further alarmed by the corporation’s denial that the transaction existed, a reason he urged the panel to ensure that a thorough investigation was conducted.

Revenue leakages are some of the most disturbing organised criminal activity going on inside of government that the Revenue Commission must uncover. The Commission needs to look at the area of solid minerals and how illegal miners steal away natural resources that should be properly exported and tge revenues shared to the tiers of government just like it is done in the crude oil sector. The Revenue commission should check the development in Zamfara and other Northern States richly endowed with solid minerals but these resources are stolen and the revenues pocketed by individuals.