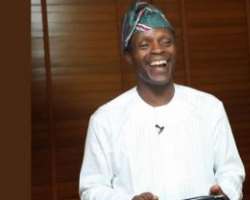 A pro-democracy group, South South Democracy Vanguard has debunked the Vice President Professor Yemi Osinbajo's claim that poverty was more pervasive in the country before now because past administrations had no social security programmes, describing the position as false.

Reacting to a statement made by Osinbajo in the United States last weekend, the pro-democracy group declared that former President's administration was more strategic in its implementation of very robust social intervention programmes which created jobs and enhanced the capacities of Nigerian youths.

In a statement signed by its Secretary General, Mr. Adrian Tamuno, the group noted that the speech in question had already been condemned by various segments of the society and urged the Vice President to always speak the truth because of the dignity and respect that is accorded his office. Below is the full text of the statement: Yoruba must fight for restructuring, not 2023 presidency(Opens in a new browser tab) Osinbajo's denial of Jonathan's social security programmes and endless litany of falsehoods It is really pitiable that Vice President Professor Yemi Osinbajo has been unable to rise up to the position God Almighty has determined that he should hold.

He has elected to remain pedestrian, petty and ordinary, sadly, against the grain of the dignity and respect which the office of the Vice President commands. His utterances have continued to be characterised by falsehoods, inaccuracies and tasteless language, the type you will never find in the company of those that had occupied the position in the past. Of all his acts of wilful indiscretion, the one that roils the populace more is his unceasing vulgar denial and revision of the achievements of the past administrations.

The good thing is that each time he attempted to discredit past Governments, especially the Goodluck Jonathan administration, he had ended up embarrassing himself and eventually falling on his own sword. The Vice President made a mockery of himself when in one of his early major statements in his high office, he blandly stated that “no new road was built in the country in the past ten years”, a period covering most of the time that late President Umaru Musa Yar'Adua and his successor President Jonathan were in office. He was soon countered by the immediate past minister of power, works and housing Babatunde Raji Fashola who declared at a public event that Jonathan constructed more roads than any other President in Nigeria.

In another of such numerous unguarded moments, the Vice President claimed that N60 billion naira was moved out of the Central Bank in a one-day unprecedented cash withdrawal during the Jonathan Presidency. While the world waits for Osinbajo to produce evidence of this bizarre postulation, the claim has severally been described as irrational, uninformed and logistically impossible in most financial circles. Perhaps, unknown to the Vice President he has indirectly indicted himself and the Buhari administration by giving the impression that the whole hullabaloo about anti-corruption fight is just mere red herring. Otherwise, how would an administration that is seriously fighting corruption explain the fact that the Central Bank governor that supervised such “grand corruption” has just been rewarded with another term as the head of the apex bank? If Osinbajo's imprudent utterances, had attracted condemnation in the past, none had been as widely condemned as his recent statement in the US where he sought to mischievously make light of the grim security situation in the land by claiming that reported cases of kidnapping back home was being exaggerated.

For telling this painful lie, Osinbajo has so far received strong condemnation from various religious groups and socio-cultural organisations including the Christian Association of Nigeria (CAN), Ohanaeze Ndigbo, the Southern and Middle Belt Forum (SMBF) as well as the Pan-Niger Delta Forum (PANDEF). In fact, the most virulent criticism came from the Pan-Yoruba association, the Afenifere which described the Vice President as a disgrace to the race and directed him to seek God's forgiveness for all his contrived acts of indiscretion. In this same speech Osinbajo also lied that Nigeria recorded worse cases of poverty in 2010, giving the impression that the YarÁdua and Jonathan administrations had no social security programmes. He said specifically: “As at 2010, Nigeria had about 112.7million people living in extreme poverty.

Nothing in place, there was no Social Investment Programme, there was no social security, no way of taking people out of poverty.” It is rather preposterous to argue, as the Vice President has done, that a government that recorded the highest rate of economic growth and attracted the highest FDI inflow would record more poor people than now when the economy is comatose. It is not for nothing that the country has been christened as the poverty capital of the world by Brookings institution, overtaking India and China, two nations with a combined population of 2.6 billion people. It is because of the abysmal performance of the economy under Osinbajo and the immeasurable level of suffering to which Nigerians have been condemned.

It therefore doesn't make any economic sense to argue that a robust economy as recorded under Jonathan would produce more poor people than the sad economic situation we have under Buhari where the National Bureau of Statistics, has continued to emphasise that millions of jobs are regularly being lost. It may interest the Vice President to note that as against the random payment of handouts to market women which this government glorifies, the Jonathan administration had a robust, well planned and sustainable social safety net programmes that produced wonderful results in lifting Nigerians, especially women and youth out of poverty. Here are just a few examples of notable achievements in the area of women empowerment and youth development under the Jonathan Administration: The Youth Enterprise with Innovation in Nigeria (YouWin), an entrepreneurship promotion which is now being copied by many African countries and the Nagropreneur Programmes turned around the lives of thousands of Nigerian youths, making them entrepreneurs and employers of labour.

The Youth Employment and Social Support Operations (YESSO), which was financed through a Specific Investment facility with an amount of US$300 million, in line with the administration's commitment to poverty reduction, allowed the poor people of Nigeria access to increased opportunities for youth employment and social service delivery.

The Community Services, Women and Youth Employment (CSWYE) project created immediate short-term employment opportunities for poor women, youth and people living with disabilities, through labour intensive public workforce. Massive support through dedicated fund to the nation's vibrant entertainment industry. This enabled the industry to create more jobs, enhanced Nollywood's growth and capacity and rapidly boosted the entertainment industry to the extent that by 2014, it contributed 4% to Nigeria's GDP.

The Community Service Scheme (CSS), a components of CSWYE, was operational in 36 states and the FCT. A total of 108,334 beneficiaries placed in the scheme benefitted from income support provided the individuals with multiplier effects to households from the scheme; these 108,334 beneficiaries have bank accounts through which stipends are being paid. The second component of CSWYE which was the Graduate Internship Scheme (GIS) GIS created opportunity for graduates to be attached to firms/organizations which mentored them, thereby enhancing their opportunity for employability.

Micro-credit for Women under the Women Fund for Economic Empowerment (WOFEE) and the Business Development Fund for Women (BUDFOW) offered business opportunities and economically empowered thousands of women across the country. Under the Subsidy Reinvestment Programme (SURE P), Human Resource for Health was increased and jobs created by recruiting 9,028 health care workers to provide MNCH services in 1,000 SURE-P supported primary health care (PHC) centres spread across the 36 states and FCT.

As at February 2014, a total of 17,400 women were enrolled into the Conditional Cash Transfer (CCT) Pilot Programme. In December 2013, Nigeria was certified Guinea Worm Disease free by the World Health Organization. The Type-3 Wild Polio virus had been contained in 2013, with no recorded transmissions for more than one year. Strategies were also developed to enhance education and make it responsive to the needs of the economy. This was part of the youth development initiatives under the Jonathan Administration aimed at empowering the Nigerian Youth to become self-reliant and socially responsible. This was in recognition of the fact that the youth in any society are the greatest investment that any country requires for meaningful development. Expanding capacities for early child education.

For Example the Almajiri education introduced with the construction of at least 165 schools to address the out-of-school children challenge, then put at 10 million children by UNICEF. The Jonathan administration developed and produced a National Framework for the Development and Integration of the Almajiri Education into basic education. This framework was to serve as a guide to states, local governments and nongovernmental organizations to key into the project aimed at providing quality education to these less privileged Nigerians.

State Implementation Committees were established in all states of the Federation to ensure that these kids are catered for educationally, wherever they may be. Construction of special girls schools in 13 states of the Federation which was designed to improve female education and empowerment. Establishment of 14 new universities; 12 conventional and two special which are the Maritime and the Police Universities located in Delta and Kano respectively to enhance access to a Federal University in all the states. As a result of these and other policies, the carrying capacity of tertiary institutions has increased significantly from about 323,527 in 2010 to over 500,000 in 2013.

The Presidential Special Scholarship Scheme for Innovations and Development scholarships (PRESSID) to First Class graduates of Nigerian universities to further develop their know how in the areas of science and technology. § For the first time in the history of this Country, a comprehensive needs assessment study was undertaken in the public universities under Jonathan. The report formed the basis for strategic intervention in the Nigerian public universities.

The sum of N200 billion was committed to infrastructural development in the Nigeria Universities in 2013. Refurbishing 352 science and technical laboratories in the 104 Federal Unity Colleges, in addition to providing 62 ICT centres and sets of mathematical kits. We don't believe that the former Vice President knew about all these and still speaks ignorantly the way he does at public gathering. It is either he is ill-informed or he is yet to understand how government works, even after spending four years on his exalted seat. Credit: Vanguard