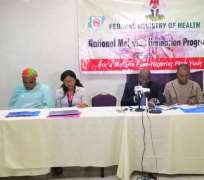 The National Coordinator for National Malaria Elimination Programme (NMEP) Dr. Audu Mohammed has called on Nigeria to improve the funding of malaria eradication.

Mohammed noted this in the first quarter media chat theme: "Bridging the Resource Gap for Malaria Elimination".The call was made on Tuesday in Abuja.

Mohammed who was represented by the Deputy Director of NMEP Tim Obot said that 9 people die per hour daily, due to malaria in Nigeria and a greater percentage of the population is at risk of the disease.

He, therefore, encouraged the private sector, government at all levels and relevant stakeholders to collaborate to halt the scourge in the country.

He noted that there was a funding gap of over 551 million dollars for commodities; stressing that “it doesn’t make sense if we can only test malaria and we cannot afford to provide treatment.

“We want to continue to provide free treatment services, but somebody has to pay; so we need to complete and fill that gap.

“If we don’t fill the gap, the commodities will not be available for pregnant women and children and that is what we don’t want.”

He also called for Indoors Residual Spraying (IRS) as the new way to go in ending malaria epidemic in the country, lamenting that the major drawback was the cost attached to using IRS.

He explained that IRS was used in the upper region of Ghana and it drastically dropped down the prevalence of malaria in the region, and encouraged states and local governments to support the initiative.

Obot noted that although NMEP observed that malaria prevalence was reducing, the National Health Demographic Survey 2018 would further drop the rate.

He also said that Nigeria had made significant gains in the control of malaria.

He added that the use of mosquito nets for children under five years of age had increased from six per cent in 2008 to 49 per cent in 2015.

He said “Insecticide Treated Net (ITN) ownership (households with 1 ITN) has also increased from eight per cent in 2008 to 69 per cent in 2015.

He added that the outcomes were as a result of synergy and support by government at all levels, as well as investments by international partners.

He, however, lamented that most of the gains earlier achieved were gradually being eroded largely due to inadequate funding and mobilisation of resource requirements that had limited access and coverage of intervention commodities.

“To arrest this negative slide and restore malaria control efforts back on track, there is need for concerted efforts by all stakeholders to consolidate on the immediate past gains by improving on resource mobilisation,’’ he said.