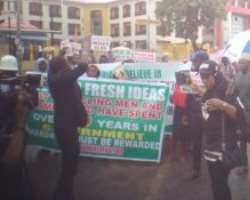 A group of concerned national stakeholders of the ruling All Progressives Congress, APC, early morning on Monday staged a massive protest against some persons identified as members of cabals allegedly running down the government of President Muhammadu Buhari, saying Nigerians voted for the President and not the cabals.

Those mentioned in the protest which took place at Defense House Maitama Abuja, are Mamman Daura, Ismaila Funtua and Abba Kyari.

Addressing newsmen during the protest, Symeon Chilagorom, national convener of the group, said Nigerians will not accept the repeat of the President Buhari's first term, as the slogan of the 2019 campaign dictates.

“Our demand is a simple one, the people of this country elected Muhammadu Buhari as their President, not Mamman Daura, not Ismaila Funtua, and definitely not Abba Kyari. Only President Buhari has our mandate to govern over the affairs of this nation.

“In light of that, we are simply asking that President Buhari should take back control of his Government and begin to walk his talk during the campaign by delivering on the promises made. These promises can only be achieved if the President is in the drivers seat not passenger's seat and if he is surrounded by patriotic men and women of goodwill who assisted him during the campaign in the eyes of the world, travel the nooks and crannies of this country to sell the ideology of the change mantra to the generality of Nigerians. And not those who hide away when the going get tough, only to re-emerge when the tough work is done and the battle is won.

“By now, we expected that a new cabinet independently formed by the President based on merit and other constitutional criteria is made public at the very least, not a situation where few members of the cabal are hiding in shadows trying to handpick their allies and cronies who have contributed to neither the growth of the country nor assist the Party and the

Presidential campaign in the run up to the 2019 General Elections.”

The protesters who came in hundreds with various anti-cabals placards said the protest was the first step to inform the presidency on the need to do away with some persons around the President Buhari.

Chilagorom also said: “Today, Insecurity permeates a vast area of the northern region majorly caused by poverty and slow pace of governance at all levels, time for governance is now.

“Let it be known that despite our coming here today, we are believers in the personal integrity and capabilities of Mr. President, his die hard supporters and it is for this unshaken belief and love for the President and the desire for us to see him carry our country to the Next Level that we call on him to take the wheel of the Nigerian Ship and navigate us through the murky waters of our many challenges to the promised land, let him not forsake us in the hands of those without peoples mandate or human sympathy.”

Also speaking, Ayo Oyalowo, who was the head of Buhari Campaign on Social Media during elections, decried a situation whereby loyal members of the party who worked for the victory of President Muhammadu Buhari were abandoned after the election.

He called on leaders of thought in the ruling party not to repeat the mistake of abandoning the real stakeholders for those who campaigned against the president when its time to make appointments. – Blueprint