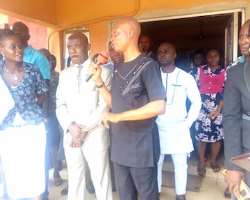 Staff of the Delta State Universal Basic Education Board (SUBEB), have been charged to show more commitment to duty.

SUBEB Scribe, Sir Byron Unini, made the call recently, saying it was important for staffers to ensure that the Board delivers on its mandate of providing universal and equal access to quality basic education for all children of school age in the state.

Sir Unini, while addressing staff of the Board at its Headquarters in Asaba where he assured staff that the Board was irrevocably committed to their welfare especially prompt treatment of all promotion matters.

“I wish to assure you that everyone due for promotion will get his or her promotion letter in no distant time as the Board is not resting on its oars. I also want to harp on punctuality and the need to comply with the electronic time

keeping system of clocking in and out at the right time for resumption of duties and closing from work as clearly stated in the civil service rules” Sir Byron Unini said.

Speaking further, the Secretary of the Board while also enjoining staff to be dutiful, effective and professional in handling official matters, stressed the need for them to show more commitments and dedication for better service delivery.

Oliver Isiayei, Chairman, Staff Welfare Union, SUBEB who responded on behalf of the staff, thanked the Secretary of the Board for calling the meeting and for his commitments in clearing all pending promotion cases.

Isiayei, however, appealed to the Board to consider training and retraining of staff especially low cadre staff for higher productivity.