IYC Sends SOS To NDDC Over Invasion Of Water Hyacinths In Over 70 Communities In Delta, Edo States 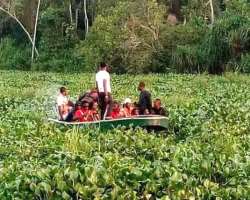 The Ijaw Youth Council (IYC), president, worldwide, Pereotubo Oweilaemi Esq., has sent a Save Our Souls (SOS), to the Niger Delta Development Commission (NDDC), over Communities trapped by water hyacinths in the Niger Delta region.

The situation has left hunger, frustration and anguish among community members in Delta and Edo States.

Barr. Oweilaemi, in a press release Saturday signed and made available to The Nigerian Voice, stated that "The riverine communities in the Niger Delta have been suffering from the perennial problem of blockade of the waterways by water hyacinth.

"Many of the communities are usually trapped in the riverine areas during this season. If not the interventions of government agencies, there would have been a big problem".

According to him, over 70 Communities in Egbema, Warri south west local government area finds it difficult doing their businesses, disclosing that over 70 communities in Egbema Kingdom and environ both in Delta and Edo States have been suffering from this scourge as water weeds have taken over the entire Creeks in the Benin River and its estuaries thereby making life miserable for the inhabitants.

Hear him: "As we speak now, communities such as: Ofunama, Opuama, Polobubou, Ogbodugbudo, Ogboinbiri among others in Egbema Kingdom are being trapped by the water hyacinth which has locked up the entire Creeks.

"People cannot go about their lawful businesses as movements in and out of the affected communities are restricted. All the access roots to the communities including the Sapele axis have been taken over by the floating weeds".

IYC called on the Niger Delta Development Commission (NDDC), to immediately respond to the plight of these communities, urging the Commission to extends its intervention projects on water hyacinth to the Egbema Kingdom and other affected Niger Delta communities.

"NDDC should do all it can to save these communities from the looming humanitarian crisis arising from the scourge.

"Unless urgent steps are taken to cushion the effects, we foresee epidemic of human disaster that will be of an unimaginable proportion.

While calling on NDDC to dig deep into the cause of the delay in rhe contract, Barr. Oweilaemi held: "We also use this medium to call on the Commission to investigate JAPAUL MINES & PRODUCT LIMITED who is handling the abandoned 46 kilometers UDO-OFUNAMA Road. The contractor needs to be questioned on what happened to the project.

"If however that the completion of the project is being delayed because of none release of funds to the contractor then NDDC should accordingly release funds for its completion", the statement added.