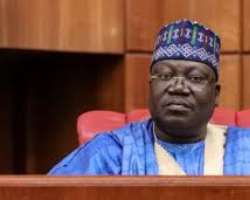 A frontline civil Rights advocacy group – HUMAN RIGHTS WRITERS ASSOCIATION OF NIGERIA (HURIWA) has condemned the nullification by the senate president Mr. Ahmed Lawan of the appointment of Dr. Festus Adedayo as his media aide citing his non-membership of All Progressives Congress (APC).

HURIWA also completely faults the national leadership of the All Progressives Congress on its insistence that 100 percent federal appointments by the President Muhammadu Buhari’s newly re-elected government for the last tenure must all be party members.

Apart from its inherent unconstitutionality to so insists, the Rights group thinks the hardline position has already polarized the nation and is a direct affront to the principle of inclusiveness which president Buhari stated would govern his choices of who to appoint to assist him in the arduous tasks of administering the nation for the next four years which ends his mandatory constitutional term limit.

In a media statement by the National Coordinator Comrade Emmanuel Onwubiko and the National Media Affairs Director Miss. Zainab Yusuf, HURIWA criticised the senate president for his indecisiveness and his incapacity to independently appoint who should be his personal staff just as the Rights group expressed apprehension that if senator Ahmed Lawan cannot withstand little pressure from job seekers masquerading as APC loyalists by not sticking to his gun on his choice of personal staff, how can he be trusted to defend the constitution should the overbearing executives decides to violates the constitution with reckless abandon?"

“There is a well-known and well regarded philosophical maxim that the first step in every enterprise is the most critical as that defines and shapes the weltanschauung (Worldview) of the person or institution that senator Lawan could appoint one of the best media brains in Nigeria as media adviser in the person of Festus Adebayo in the morning only to sack him in the evening even before the ink on his letter of appointment has dried up shows that Nigeria is doomed particularly because of the stories going round that the wife of the president was instrumental to his volte face. How can this senate president be expected to lead an independent parliament if he can be intimidated, harassed and compelled by rabidly partisan members of his party to offload his media adviser after he (the senate president) had already circulated the press release announcing his appointment?”

“We think it is legally actionable because what this has done is to try to demarket and destroy the hard earned professional status of this prestigious journalist in the person of Dr. Adebayo except and unless the senate president pays princely compensation for inconveniencing the gentleman. This is so very unfair.”

“We expect political leaders to be leaders and not puppets of some external forces. This indeed are bad times for Nigeria and only eternal vigilance from Nigerians can restrain the ever rampaging presidency that has exhibited monumental nepotism from destroying constitutional democracy”.

Speaking specifically about the submission by APC that only card carrying members of their political persuasion can bag appointments under the federal government, HURIWA said that is not the position of the law and practice under any known presidential system of government globally even as it argues that under parliamentary system, certain positions like the cabinet level appointments are the exclusive preserve of parliamentarians but there are several other key institutional appointments that must not necessarily be occupied by party members even in nations such as United Kingdom whereby Parliarmentary system of government is in vogue.

HURIWA said that the scenario of parliamentary system is fundamentally different from the presidential system because the president is elected not by his party members but by all citizens most of whom belong to no political party and so the constituents of the President are not just his card carrying members. After all how many Nigerians are registered members of political parties compared to the demography of the voters who elected President Muhammadu Buhari? The watery arguments that only those in APC can carry out the blueprints of the party i illogical and a fallacy of disjointed logic or ambiguity since the APC's manifesto just like all others flow from the Nigerian constitution which is binding on all Nigerians".

HURIWA submits that all relevant sections of the Constitution never specifically mandates the President to pick only his party members to work for him to the exclusion of all others just as the Rights group cited sections 151 and 152 of the Constitution to show that the President is obliged to be fair, just, equitable in his assignments of functions to citizens and not to party members. Those sections provides that: (1) "The President may appoint any person as a Special Adviser to assist him in the performance of his functions. (2) The number of such Advisers and their remuneration and allowances shall be as prescribed by law or by resolution of the National Assembly. (3) Any appointment made pursuant to the provisions of this section shall be at the pleasure of the President and shall cease when the President ceases to hold office.”

HURIWA reminded the APC national officials that the only cabinet level position that goes with constitutional definition of the occupant is the office of the Federal Attorney General and minister of Justice as spelt out in section 150(1) and (2) of the Nigerian Constitution whereby only legal practitioner of certain experience is to be so appointed. In section 147 of the constitution on the appointment of ministers the President can appoint citizens deemed qualified from all across Nigeria.