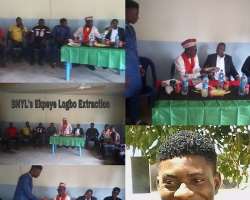 Biafra Nations Youth League, BNYL, has lashed out at the Vice Presidential candidate of the people's Democratic Party, PDP for his statement that the Minister of Transportation, Chibuike Amaechi was not an Igbo man and also not relevant in Rivers State. Reacting to the statement, Secretary General of the group, Ordu Jeoffrey Nwosoriba described Peter Obi's comments as embarrassing to the Igbo speaking people of Rivers State. "I don't expect such comments from Mr Peter Obi. Such statement was an insult to those who are of Igbo extraction in Rivers State. I wasn't in support of Amaechi's politics against Jonathan, although he said it was because our oil wells were ceded to Bayelsa but then his actions wasn't fair enough. I am only happy with him that he is not among those who for political reasons deny their Igbo heritage".

The BNYL backed the statement of Ikwerre Youth Movement, IYM, led Mr Worlu asking Obi to tender an unreserved apology to Amaechi as the comment was an insult to the Ikwerre people.

Nwosoriba, a native of Ahoada East, in Rivers State speak the Ekpeye dialect, he accused the Ohanaeze Ndigbo of insincerity and two face politics which he said was against the quest for the BNYL's Biafran pursuit.

He said the BNYL does not buy into the idea of Igbo Presidency 2023 as a result of the political gang up against the South East and South South.

" Even the Senate President, Ahmed Lawan has said it all that power is returning to the West after Buhari. The Yoruba and the Hausa are currently in control of the government and they decide any region to handover to because power is with them".

He added "even Peter Obi who is struggling to be part of national politics is not relevant, if you observe, Ebonyi State Governor and other Igbo States were against another VP from Anambra that was the major reasons most Igbo men were not fully with PDP, he is only being respected in Anambra".

BNYL said Mr Obi's comments was a ploy to cause damage to the unity of the Organization and what they have built for years of their existence, adding that the group shall remain focused on the struggle for Biafra.