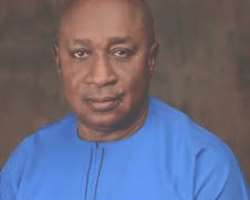 The successful inuaguraton of the 9th Senate on Tuesday, 11th June 2019, marks a new era in Nigeria’s legislative business. It has also given rise to fresh hopes and expectations from the Nigerian people who make up the 109 Senatorial districts the new Senators are elected to represent.

Dr. Mike Ama Nnachi is one of the 109 new Senators who have been constitutionally empowered to conduct the legislative business of the 9th Senate. He is representing Ebonyi South Senatorial district under the platform of the Peoples Democratic Party (PDP). He replaced Sonni Ogbuoji who was there for eight years.

The mini reception put together by the people of Ebonyi South zone at Christian Pilgrims Board Abuja in honour of Ama Nnachi’s triumphant entry into the red chambers speaks volumes of the acceptability he enjoys from his people.

Apparently aware of the needs of his people, Senator Ama Nnachi in his remarks at the reception assured his constituents of efficient and effective representation that would impact positively on the people of the district and the entire state.

While thanking his people for the warm reception and for attending the reception, promised not to disappoint them as he holds sway in the red chambers. He specifically thanked Governor David Umahi for being there for him just as he reiterated his commitment to partnering the Governor in his efforts to transform the state.

Senator Nnachi further promised to carry his constituents along his policies and programmes especially by constantly consulting and meeting with them and other relevant stakeholders on the way forward for the zone and by extension, the entire state.

He assured that his stay in the red chambers would be qaulitative as he would sponsor bills and move motions that would ensure effective and qaulitative representation of Ebonyi South zone. This, he said, will bring about human and capital development in the district and the state at large.

His words: “Those in attendance here are not just the people of Ebonyi South, but the entire Ebonyi state, as evidenced by the presence of the Deputy governor of our state, His Excellency Dr. Eric Kelechi Igwe, and other stakeholders from the three senatorial zones of the state.

“My brothers and sisters from Ebonyi Aouth, I shall not let you people down. But let’s also not forget that the main principal function of a lawmaker is lawmaking and not infrastructure.

“You will see quality laws from me that will come better than physical infrastructure. I can assure you all that I will never sleep. I will continue to work and work until the people of Ebonyi South enjoy the full dividends of democracy.

“I will also through my constituency projects provide those basic needs of life that will improve the well being of our people.

“Also, as part of my policy of inclusiveness, I will be doing massive consultations. I will run to the governor, the deputy governor and stakeholders of Ebonyi South for advice when the need arises.

“I will also form a caucus of Ebonyi South stakeholders who I will be having quarterly meetings with to discuss how to move the senatorial zone forward.”

Speaking during the occasion, Governor David Umahi who was represented by the state Deputy governor assured the Senator of the support and co-operation of administration of Governor David