Graduate Arrested For Robbery In Ogun 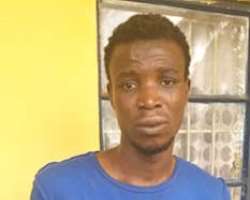 A 24-year-old graduate, Afolayin Sunday has been arrested by men of Ogun state police command in ijoko area of Ota for armed robbery.

The suspect who studied maths/computer at Adeniran Ogunsanya College of Education, Ijanikin Lagos was arrested after he successfully robbed a POS attendant.

It was gathered that the suspect walked into the POS shop, pretended to be a customer who came to transact business.

Having realized that the victim was the only person in the shop, he grabbed her on the neck and brought out a knife with which he robbed the woman. He thereafter ransacked the drawer and stole the sum of N42000 and ran out of the shop.

The victim after regaining her consciousness, raised an alarm which alerted the policemen on routine patrol from Agbado division who chased the suspect with the help of people around and got him apprehended.

Having got him apprehended, it was discovered that the suspect had earlier robbed one Abimbola Oyebolu and one Ibrahim Oluwadamilola.

He was said to have inflicted various degree of injuries on his victims before forcefully dispossessed them of their phones and money.

Recovered from the suspect is the sum of N42,000 which he took from the last shop.

The Police Pubic Relation Officer for Ogun State Police Command, Abimbola Oyeyemi told The Nigerian Voice that the Commissioner of police in the state, Bashir Makama has ordered the transfer of the suspect to special anti robbery squad (SARS) for discreet investigation and prosecution.