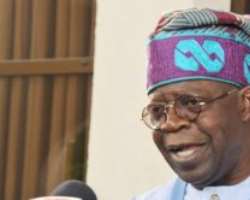 George said this during an interview with our correspondent on the telephone while reacting to Kola's allegations that after the annulment of the June 12, 1993 election, Tinubu approached the late military dictator, Gen. Sani Abacha, and begged him for a commissioner appointment in Lagos State.

According to Kola, it was after Tinubu had lost out that he decided to join hands with the National Democratic Coalition to fight for the actualisation of the June 12 mandate.

George, who is also a former military administrator, hailed Kola for stating the facts even as he lamented that many opportunists were seeking to twist history.

He said, “It is true that Tinubu went to beg for a commissioner position. He was in the Villa and Gen. Oladipo Diya is a witness. He (Tinubu) said he wanted to be a deputy to a military administrator and when all that didn't work, he went into his activism.”

The PDP chieftain hailed Kola for deciding to make a documentary of the June 12 saga.

George said Kola must not be victimised for saying the truth since, as the first son of MKO, he was an insider.

He said, “Most of what Kola said is true. He spoke from the heart and he was trying to set the records straight in the face of the many narratives. He had been looking for who would help to recognise the June 12 saga so that his father wouldn't have died in vain.

“In the course of this, he had bottled up so much. He went through a lot, having lost his mother and family businesses during the struggle. So, he was setting the records straight so that people would not rewrite history.”

The PDP chieftain, however, said Nigeria had yet to learn from the June 12 saga.

He said the lessons of June 12 go beyond declaring a holiday or immortalising MKO.

George said, “Now, June 12 has been adopted as a national holiday but have we learnt any serious lesson from it? Have we done anything to ensure that the mistakes of the past are not repeated?

“Yes, people are pontificating and trying to use it as a political tool but believe we have not learnt anything.”

The PDP chieftain said Nigerians were more united during the June 12 struggle than today and argued that more emphasis should be placed on uniting the nation through the legacy of June 12.

Attempts to speak with Tinubu's media aide, Tunde Rahman, proved abortive as he neither returned calls nor responded to a text message on Saturday. Punch