The Three Abba Kyari(s) In Borno And The Confusion Of Personalities.... 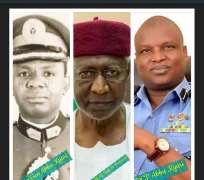 There are three personalities bearing the same name 'ABBA KYARI', Know them by their profiles (1) Brigadier Abba Kyari
Abba Kyari (1938-2018) was a retired Nigerian Army Brigadier who served as Governor of the now defunct North-Central State, Nigeria after it was formed from the Northern Region during the military regime of General Yakubu Gowon.

Abba Kyari was born in 1938. He attended Borno Middle School and Barewa College, Zaria. In 1959 he enlisted in the Nigerian Army as an Officer Cadet. He attended the 12th Regular Officers’ Training School, Teshia, Ghana (March 1959 - September 1959) and then the Mons Officer Cadet School, Aldershot, England (October 1959 - March 1960). He held various appointments in the army, including Platoon Commander and then Transport Offices in the 1 Brigade Transport Company, Second-in-Command and then Commander in the Nigerian Army Artillery, commander of 1 Brigade, Kaduna and Commanding Officer 5th Battalion, Nigerian Army, Kano.

During the outbreak of violence against the Igbo people in Northern and Central Nigeria in 1966, Abba Kyari assisted Igbo soldiers in escaping from Kaduna, including Major Samuel Ogbemudia, who later was appointed Governor of Mid-West State in September 1967 following the state's liberation from secessionist Biafran forces. General Yakubu Gowon appointed Colonel Kyari Governor of North-Central State in July 1967. As governor, he commissioned a master plan for the Kaduna metropolis, but in practice the plan was not followed by his successors. He was not tolerant of the free press. For example, in April 1975 he strongly attacked the New Nigerian for publishing a picture of officers attending a conference that mainly showed junior officers. Towards the end of Gowon's administration, Kyari was a cautious advocate of return to civilian rule.

Kyari led the Northern delegates to the 1994 National Constitutional Conference, and was appointed Chairman of the National Defence Committee of the conference. After retiring, he was appointed to the board of directors of First Bank of Nigeria, Standard Alliance Insurance and Merchant Bank of Commerce. He became Chairman of Gamah Flour Mills and of Alif Engineering and Construction. Kyari, a Kanuri by tribe, is a native of Gujba Local Government Area of Yobe State. He was born on March 17, 1975, into the family of Alhaji Baba Kyari, at the metropolitan city of Maiduguri, Borno State. He had his primary and secondary education, at the University of Maiduguri Staff Primary School and Government College Maiduguri, where he obtained his Senior Secondary School Leaving Certificate, SSCE. He gained admission into the University of Maiduguri in 1993 and graduated with a Bachelors degree in Geography in 1997. Afterwards, he proceeded on his compulsory National Youth Service, NYSC, and was attached to 6th Motorized Infantry Battalion of the Nigeria Army, at Igbawa Abak Local Government Area of Akwa Ibom State.

Nigeria's most accomplished detective and a gallant police officer with numerous national and international accolades recently celebrated his birthday in a remarkable acquiescence and modest manner. In all his Career successes, his warm heartedness, good-naturedness, amiable and charitable nature has remained his forebearing testament.

He joined The Nigeria Police in the year 2000 as a cadet Assistant Suprintendent of Police and the rest is a story of a myth that have defiled conquerors..

DCP. Abba Kyari is currently the Commander, Inspector-General of Police Intelligence Response Team (IRT) and a member of International Association of Chiefs of Police (IACP)

We will chronicle some of the accolades that have distinguished him in his career.

Africa’s Best Detective Of the Year 2018
The best Police officer of the Decade Award
2018 HERO of the year Award by Silverbird Group
Presidential medal for courage from President Mohammadu Buhari on 1/4/2016.

He has led covert operations of many high profile cases that includes;

• Arrest of Nigeria’s most notorious Kidnap kingpin Billionaire Kidnapper Chukwudumeme Onwaumadike Aka Evans in Lagos State and his Gangmembers,

• Arrest of the most wanted Boko-Haram Commander Umar Abdulmalik and Eight (8) of his Terrorists gang members,

• Arrest of Twenty-two (22) Boko-Haram Terrorist gang members responsible for the kidnap of the Chibok School Girls in 2014 and also responsible for series of suicide bombings/several attacks and ambush against Security Agents in Borno, Yobe and Adamawa States.

• Captured the Most Deadly Kidnapper in the History of Nigeria, Henry Chibueze Aka “Vampire” in Owerri, Imo State and his gangmembers,

• Arrest of kidnappers who kidnapped a serving Assistant Comptroller of Customs In Portharcourt,

• Arrest of a syndicate of kidnappers, armed bandits and their sponsors in Zamfara State, after the gang had kidnapped the twin sisters before their wedding,

• Arrest of deadly armed robbers and murderers who escaped from lawful custody at the SARS Lokoja, Kogi State,

• Arrest of suspect responsible for the murder of Lieutenant Abubakar Yahaya Yusuf a serving Naval Officer and his girlfriend Miss. Lorraine Onye in Rivers State,

• Arrest of deadly kidnappers responsible for the kidnap of two South African Citizens in Kaduna State,

• Arrest of the Terrorist responsible for the bombing of Kuje and Nyanya towns of Abuja and recovery of primed bombs in the FCT,

• Arrest of deadly kidnappers responsible for the kidnap of two Americans and two Canadians in Kaduna State,

•Arrest Of a Notorious Criminal who threaten to Kill the Former Vice President of Nigeria Atiku Abubakar and his Family.

• Arrest of the kidnappers of elder statesman Chief Olu Falae in Ondo State,

• Arrest of gang of deadly killers responsible for the killing of several innocent persons in Benue State and recovery of their operational weapons,

• Arrest of notorious arms and dealer who specializes in selling arms to armed robbers, kidnappers and Politicians in South-West/recovery of over Fifty arms and thousands of life ammunitions,

• Arrest of the most notorious armed robber in the South-West, Abiodun Egunjobi Aka “Godogodo” in Ibadan, Oyo State, he was responsible for the death of over Five hundred (500) innocent Nigerians & Police Officers,

• Arrest of the Kidnappers of the Turkish School Girls in Ogun and Lagos States,

• Arrest of the kidnappers/murderers of Barrister Sherif Yazid along Abuja-Kaduna Express road,

• Arrest of most the notorious kidnapping kingpin in Kogi State Halti Bello and twenty of his gang members, the gang had been terrorizing Kogi State and its environ for many years, who also kidnapped and murdered one Istifanus Gurama a senior staff of Dangote group,

• Arrest of more than Fifteen (15) different gangs of kidnappers totaling over Three hundred (300) kidnappers and recovery of over Two hundred (200) AK47 rifles and other dangerous weapons used in terrorizing Abuja-Kaduna-Kano Highways,

• Arrest of the most Notorious assassin in the South-west Ade Lawyer and his gang responsible for series of killings in various parts of Lagos State and South-western Nigeria,

• Arrest of the Kidnappers of Isheri Landlords in Lagos State,

• Arrest of the Kidnappers of Ikorodu School Girls in Lagos State,

• Arrest of the Kidnappers of CBN Governor’s wife in Delta State,

• Arrest of the Kidnappers of Ambassador Bagudu Hirse in Kaduna State,

• Arrest of the Kidnappers of Serrie Leonian Deputy High Commissioner in Kaduna State,

• Arrest of the Kidnappers of former Minister of Finance Okonjo Iweala’s Mother in Delta State,

• Arrest of notorious gang who planned to Kidnap Nigerian billionaire

• Arrest of the Armed Robbers/Militants who attacked and robbed Lekki, Ikorodu, Festac and Agbara Banks in Ogun and Lagos State,

• Arrest of the Kidnappers of the three (3) Orekoya’s Children in Lagos State,

• Arrest of the Kidnappers of Former Chairman of Ejigbo LGA in Lagos State,

• Arrest of Killers of Oyo State member of House of Assembly in Oyo State,

• Arrest of the kidnappers and Killers of Reverend father Adeyi in Otukpo Benue State,

• Arrest of Kidnappers of Alhaji Salami in Abuja,

• Arrest of the kidnappers of two (2) ABTI American University of Nigeria Female Students in Abuja,

• Arrest of the attackers of Nimbo Community in Enugu State and many more breakthroughs that are too numerous to mention.

• He Fought Armed Robbery, Kidnapping and other Violent Crimes in Lagos State to Standstill during his five (5) years as OC SARS Lagos State from 2010-2015. Now he is recording tremendous successes across the Nation as the Deputy Commissioner of Police In-charge of IGP Intelligence Response Team (IRT).

He is a caurageous officer who believes in T. Blauer's words "never let fear, pride or ego to dictate your next battle plan". In his many battles with the underworld, he looks at the tenacity, the will, and the indignation that propels his action against them. His hatred and onslaught against criminals and criminality is born out of his love for a peaceful world.

Like Lieutenant Colonel Arnaud Beltrame of France who exchanged himself for a hostage during a supermarket siege in southwest France and eventually paid the supreme prize, DCP Abba Kyari have severally laid his life on line that Nigeria will be safe. Abba Kyari, the Chief of Staff to president BUHARI.

(3) Abba Kyari, the Chief of Staff to president BUHARI...

Between 1988 and 1990, he was Editor with the New Africa Holdings Limited Kaduna, (publishers of Democrat Newspapers). He served with the Borno State Executive Council as Commissioner for Forestry and Animal Resources in 1990 and was Secretary to the Board of African International Bank Limited, between 1990 and 1995.

Abba Kyari was Executive Director, Management Services, United Bank for Africa Plc. (UBA) and later the Managing Director and Chief Executive of the Bank. He was appointed a Director of Unilever Nigeria Plc. in 2002.

He served as Honorary Member of the Presidential Advisory Council on Investment in Nigeria between 2000 and 2005. He is a recipient of the Nigerian Honor Award of Officer of the Order of the Niger (O.O.N).