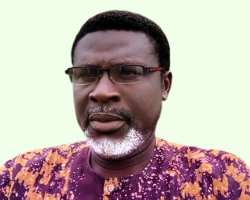 A stalwart of the Peoples' Democratic Party (PDP), in Delta State, Chief Sunny Onuesoke, has congratulated Senator Ovie Omo-Agege, the senator representing Delta Central in the National Assembly (NASS), on his election on the floor of the Red Chamber as the Deputy Senate President of the Ninth Senate of the Federal Republic of Nigeria.

Omo-Agege, a member of All Progressives Congress (APC), hails from Orogun in Ughelli north local government area of the state.

He secured 68 votes in the election to defeat Senator Ike Ekweremadu of the Peoples Democratic Party (PDP) who polled 37 votes.

Commending Omo-Agege over his victory while addressing journalists in Asaba, Delta state, Onuesoke stated that he has put party differences aside to congratulate his own kinsman on his victory, stating that his election as the Deputy Senate President of Nigeria has uplifted the name of Delta state to a greater heights, giving the state a national and global recognition.

The former Delta State Governorship aspirant pointed out that the election of Omo-Agege as the second in command in the Red Chamber in face of suffocating opposition was a demonstration that he has good relationship with his party members.

While rejoicing with Omo-Agege as the new Deputy Senate President, Onuesoke expressed his appreciation to the PDP and APC senators who deemed it fit to vote for Omo-Agege, a lawmaker from South-South, who hails from a minority state.

He, however, advised the new Deputy Senate President to put behind his political affiliation and tribe to use his good office to attract Federal attention in term of development to his state and South-South region of Nigeria by inducing industries that would provide employment to the teeming unemployed youths, infrastructural development, security, qualitative education and socio-economical development among others.

The out spoken politician equally urged him to use this opportunity to advance the dredging and reopening of the Warri, Koko, Burutu, Port Harcourt and other seaports in South-South region which have been neglected and suffered several setbacks in the past.

Hear him: “If the seaports are re-opened, it will provide jobs for the teeming unemployed youths and as such reduce the present high crime rate. It will equally open up the socio-economic life of the people", he stressed.