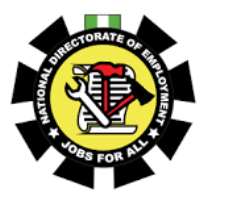 Determined to reduce the high rate of unemployment bedeviling youths in the country, the Federal Government (FG), through the National Directorate of Employment (NDE), has begun orientation process for 1000 youths to be trained in various skills in Delta state.

The NDE Co-ordinator expressed hope that the young artisans after the training would be the next generation of cosmetology products, producers, fashion designers, electricians, computer operators, bricklayers and tillers.

She also hoped that the young artisans would bring multiplier effect by creating several other jobs which would impact on the country's economy.

She recall that in April this year, the Directorate undertook employment activities under its various schemes and programmes.

According to her, "under food processing and packaging scheme of the rural employment promotion programmes, 48 unemployed persons were given N20, 000 each. Under the agricultural value chain scheme and agribusiness enhancement scheme 60 and 36 unemployed Deltans received N40, 000 and N50, 000 respectively. The Small Scale Enterprises department under its Basic Business Training, disbursed N85, 000 each to 14 hitherto unemployed persons to enable them commerce or enhance business of their choice. The women employment branch, also gave N25, 000 each to 50 women. The graduate attachment programme of Special Public Works programme recruited 22 unemployed graduates who were posted out to different places of assignment".

She opined that using skills acquisition as tool for employability and poverty reduction not only wealth would be created but sure path to sustainable national growth and development, "therefore, the use of skills acquisition to build employment is crucial for attainment of the Economic Recovery and Growth Plan".

She pointed out that vocational skills is Central to human survival as it is the key to sustenance and satisfaction of basic human needs and also a vehicle for a person to re-assert one's own dignity, occupy a productive place and feel useful and contribute positively to the family and society.

While urging the youths in the state to take this wonderful opportunity at their door step and make themselves useful to their families, Communities and the nation, she warned staff of the Directorate to manage very well the huge tax payers fund invested in the projects.

Meanwhile, the Ag state Co-ordinator, who assumed office on Friday 31 May 2019, followed the retirement of Mr. Francis Aninye, the former NDE Co-ordinator, is a Deputy Director and a Chartered Accountant with the Directorate, until her recent posting, she was the Head of Department, finance and Accounting.