We Are Sorry For Unlawful Impeachment - Imo Assembly Begs Madumere 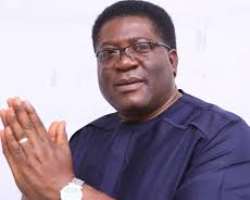 At the valedictory session today, the 8th Imo House of Assembly led by Rt. Hon. Chinedu Offer, regretted ever participating in the inglorious and purported unlawful impeachment of the immediate past Deputy Governor of Imo State, Prince Eze Madumere, which was declared by Imo High Court as illegal, null, void and of no effect, thereby extended their apologies.

Rt. Hon. Chinedu Offor's led Assembly has been over turning virtually most of immediate past Governor Rochas Okorocha's injusticeanle self serving driven actions and inactions that were found unfit in any civilised society democracies, earlier today, during a valedictory session, Speaker Offor brought up Madumere's purported failed impeachment saga as one of the fundamental mistakes of the 8the assembly and apologised accordingly.

unlawful
Mr. Speaker, supported by the member representing Mbaitolu state constituency, Hon. Ifeanyi Nnataraonye rose to shower encomium on Madumere for his role to ensure that the state was not turned to banana republic and eulogised him for leading the fight against impunity, not minding his position. Others who spoke in support of Imo Assembly's condemnation of unlawful actions were, Hon. Mike Iheanaetu of Aboh Mbaise, Hon. Chika Madumere of Nkwerre Constituency, Mr. Marcel Odunze of Orlu Constituency.

The House also commended Madumere for his rare comportment even in the face of extreme provocation and how he went about the issue of clearing his name over false allegations leveled against him.

It will be recalled that Okorocha, in a bid to punish Madumere for refusing to work with him on his son-in-law project and for standing against inequity, injustice, anti people policies and impunity in contradiction with his agenda, had sponsored an impeachment move against his deputy at the floor of the House of Assembly. It was alleged that those who participated were promised N30 million each. Those who refused, rejected Okorocha's grandstanding and onslaught against Madumee were suspended by the Speaker, Ihim. Among the five legislators who were affected were Hon. Chiiji Collins, Israel Nnataraoye, Nkenna Nzerue, Uche Oguwuike and Donatus Onuigwe.

For reasons hinged on lack of due process and failure to obey an interlocutory court summons with an order to stay action pending the determination of the matter before a court of competent jurisdiction. It will be recalled that Okorocha in a desperate move had in his tradition,against the court order, had persuaded his puppets led by Ihim to go ahead in the late evening of July 30, 2018, shortly after court sitting.

On September 25, 2018, Imo High Court supretended by Justice Benjamin Iheka, in a historic ruling and judgement had declared the purported impeachment as null, void and of no effect,saying that the said impeachment lacked due process and was illegal.

Predictably, Okorocha in his bravado and signature style of leadership by impunity procured a deputy designate who was never sworn-in due to the illegality of the appointment. The preceding action was the cautioning of Okorocha by the Chief Judge of the State, Hon. Justice Paschal Nnadi during the law week, warning Okorocha to desist from the shameful act of recognising one Calistus Ekenze, stating that it was rather putting the state in a bad light.

Meanwhile, since Imo Assembly exorcised itself of bad eggs, creating room for emergence of Chinedu Offor as Speaker, the House of Assembly has witnessed a turn around and total condemnation of Okorocha's impunity with series of legislative repeals and revocation of Okorocha's actions and calling for his probe has to a very large extent restored the respect of Imo legislative arm.

With the Chinedu Offor led outgoing House of Assembly members retracing their steps to condemn injustices meted out to Madumere and apologising for playing a role would surely serve as extra judicial action to totally erase the issue of purported impeachment, the House may have struck the right cord that will give them good mention in the history of the state.

In response, immediate past Deputy Governor commended Imo Assemby for towing the path of honour by retracing it's step from aiding Okorocha's impunity and onslaught against him. "What can I say other than to bless them. In every civilised society that is what happens and I am happy for their courage to apologise. "I believe in forgiveness and I had already forgiven all despite the weightiness of wrongful allegations against my person. I am a Christian and I must follow the path of our Lord Jesus Christ", stated by the release signed by his Media Adviser, Uche Onwuchekwa.

Madumere however admonished those who will be in the 9th Assemby to be courageous enough to work for the state according to the dictates of its constitutional duties and to ensure there is synergy hinged on common good for the good of Imo people"; the release stated.