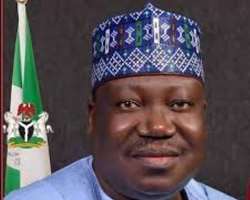 Yobe North Senator-elect and Ali Ndume of Borno-South are officially the only two senators who went head-to-head for the Senate President.

The Clerk of the National Assembly, Mohammed Sani-Omolori, subsequently announced the procedure and process of election.

The method of voting is secret ballot.