By Rivers Network for Positive Change 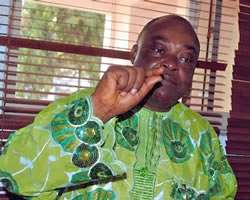 We have read with both laughter and disdain that some individuals will never change from their evil ways.

The title of a recent write-up “The Anti-party activities: APC Chieftain Eze charges APC NWC to take actions against Abe’ would not have been authored by anyone else, save the character who by his activities and actions has earned himself so much notoriety, rather than fame.

Any individual who sets out to be a judge in his own court is up to some mischief, to say the least. This aptly describes the man Chief Eze Chukwuemeka Eze who has been spewing all manner of falsehood, vituperation, and half-truths against an innocent man and personality such as Senator Magnus Abe.

If Chief Eze at his age does not know that when one is in a hole, one should stop digging, then it is sad and unfortunate. Who is Eze to direct the National Working Committee (NWC) of a ruling and respected political party like the All Progressives Congress (APC) to investigate a party chieftain or any other member for that matter and wield the big stick against anyone suspected of anti-party activities or wrongdoing? It is sad commentary that Chief Eze claims to be a member of the APC but knows next to nothing about the modus operandi of the party’s NWC.

Perhaps it is pertinent to note that two kinds of people may exist: Trouble makers and troubleshooters. Clearly, Abe falls into the latter. Therefore for a character like Chief Eze to say that Senator Abe connive with others to cause the crisis that snowballed into the inability of the party to field candidates for positions in the last general elections in the state is a lie from the pit of hell. The story of how the Rivers APC went on its knees is an open book to all followers of the politics of the state.

Senator Abe has never spoken with saliva in his mouth while expressing his love for APC since he and a myriad of others including the former Minister of Transportation, Rotimi Amaechi defected from the People’s Democratic Party (PDP); and his activities and actions bears him out as a committed member loyal to the party and President Muhammadu Buhari and does not have any intention to dump the APC for the PDP or any other party for that matter. Abe’s contributions to the party till date cannot be undermined by any. How Chief Eze see things may largely depends on the colour of spectacle that he wore at a particular point in time and of course he is entitled to his shallow views and diminutive thinking.

Perhaps for the umpteenth time, it should be stated that Senator Abe does not hate Amaechi. Rather he has addressed the former Transportation Minister as the leader of the party in the State on several occasions. Clearly, Abe and Amaechi know each other better than Eze knows either of the two politicians who may differ on issues, not trifles or issues of development.

That a politician or politicians who may be from the same Senatorial district or same tribe or friend(s) to Abe defected to the PDP neither amounts to him preparing to follow suit nor privy to their decisions or asked anyone to take what is supposed to be a personal decision from an adult.

What does Chief Eze stand to gain by retooling a conversation that is known to all including himself except that his actions for quite a while now portray himself as a man, like many of his kind that clearly sees evil but lacks the moral fibre to call it what it is, but prefers to maintain a studied silence.

For Eze and co-travelers, there is a simple message. When animals that have horns are called, will the snail also show up merely because it has two tentacles?

How can Eze accuse the APC NWC of turning a blind eye to what in his estimation is anti-party activity(ies), when in truth characters like him who indeed guilty of such a contrived allegation. Or isn’t that a contradiction in terms? Well, if Eze is looking for social accommodation nay economic relevance from his known paymasters, pelting stones at Senator Abe or dishing out falsehood in the public space and social media is not the way to go, because it is self-destructive when push comes to shove!