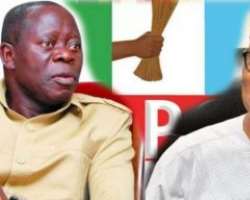 Chief John Odigie-Oyegun, immediate past National Chairman of the All Progressives Congress (APC), has fired a salvo of criticism against  the party's current Chairman, Adams Oshiomhole, whom he described as lacking the leadership capacity to move the party forward.

Odigie-Oyegun exonerated himself  from the crisis facing the party in Zamfara State and other states of the federation.

In a statement signed by his Special Assistant on Public Affairs, Chief Ray Morphy, the former chairman said he could not be responsible for the crisis in the party as was being alleged in some quarters.

The statement was in reaction to allegations by six South-South APC state chairmen on Friday.

The chairmen had attributed the current challenges facing the party as a “landmine” left behind by Odigie-Oyegun's administration.

But  Odigie-Oyegun would not buy that line of thought.

According to him, “Oshiomhole fails because he lacks the temperament required to run a political party.

“He lacks the capacity to manage different interests and tendencies that constitute a political party.

“He engages his mouth before engaging his mind, so he offends party members, so how does that constitute traps by Oyegun,” Odigie-Oyegun wondered.

He recalled that already, the APC Deputy National Chairman (North) had confirmed that Oshiomhole runs the party without recourse to its National Working Committee (NWC) and acts in direct opposite to its decisions.

Odigie-Oyegun noted that many party men were against Oshiomhole because of unfair treatment and injustice meted on them during the party's last primaries ahead of the 2019 general elections.

“Only a bad carpenter quarrels with his tools, indeed Oshiomhole is degrading and de-marketing the party, rather than seek to bring more people on board, he is chasing people out of the party with his agbero style of engagement,”Odigie-Oyegun said.

Sen. Lawal Shuaibu, APC Deputy National Chairman, North, had recently called on Oshiomhole to resign for allegedly failing to add value to the party since his election.

Shuaibu, in a six page letter dated May 27 and addressed to Oshiomhole, accused him of incompetence, high handedness and immaturity in his handling of the party's affairs.

In the letter made available to newsmen at the party's National Secretariat on Tuesday in Abuja, Shuaibu noted that the APC had lost control of seven states under Oshiomhole.