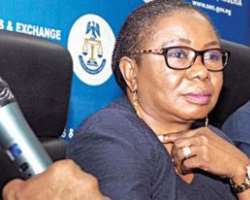 The Securities and Exchange Commission (SEC) has taken steps to safeguard shareholders interest in Oando Plc, whose board was sacked for various infractions.

SEC named Mutiu Sunmonu as the head of an interim management team it constituted to oversee Oando Plc.

It mandated members of the interim team to conduct an Extra Ordinary General Meeting on or before July 1 to appoint new directors to the Board of the company.

The new board would subsequently select a management team for Oando Plc, the SEC said yesterday in a statement signed by its Head of Corporate Communications, Mrs. Efe Ebelo.

Sunmonu, till date, is an Independent Non-Executive Director of Unilever Nigeria Plc, and the Chairman of Julius Berger Nigeria Plc.

SEC said in a statement, “Further to our press release on Oando Plc, dated May 31, 2019, the commission hereby informs the public of the constitution of an interim management team headed by Mr Mutiu Olaniyi Adio Sunmonu CON, to oversee the affairs of Oando Plc, and conduct an Extraordinary General Meeting on or before July 1, 2019, to appoint new directors to the board of the company, who would subsequently select a management team for Oando Plc.

“The commission wishes to reiterate its commitment to maintaining the integrity of the market.”

The SEC also directed the payment of monetary penalties by the company and affected individuals and directors, and the refund of improperly disbursed remuneration by the affected board members to the company.

Earlier Sunday, the management of Oando Plc., had accused SEC of acting without following due process, asking the regulator to produce the forensic audit report of its investigation on the company.

It challenged the SEC to an engagement, claiming that the regulator's verdict was suspicious. According to it, besides the fact that Oando was denied fair hearing, SEC sat on the forensic audit report for six months.

In a statement on its website, Oando PLC responded to the SEC report saying: “Oando is of the view that these alleged infractions and penalties are unsubstantiated, ultra vires, invalid and calculated to prejudice the business of the company.

“The Company has not been given the opportunity to see, review and respond to the forensic audit report and so is unable to ascertain what findings (if any) were made in relation to the alleged infractions and defend itself accordingly before the SEC. The Company reserves its rights to take all legal steps to protect its business and assets whilst remaining committed to act in the best interests of all its shareholders.”

The severity of the penalties and the timing of the release have roused public curiosity as to the motive and the basis for the penalties, the Chief Operating Officer, Oando Energy Resource, Dr. Ainojie 'Alex' Irune, said at a news conference.

Irune said: “We were not given a chance to review and respond to the outcome of the report. You do not sentence a person to death without giving him or her a chance to defend him or herself.

“In this instance, we have been sentenced to death without knowing what our crime is or being given a chance to defend ourselves.  At the barest minimum, best practice requires that you give the person a chance of a fair hearing. We have not been accorded this opportunity.”

Dr. Irune explained that when the company decided to drop its court case challenging SECs decision to carry out a forensic audit, it was assured that they could trust the system for an independent investigation that would be fair and follow due process.  He said it was in the spirit of transparency, cooperation and full disclosure that it agreed to the forensic audit.