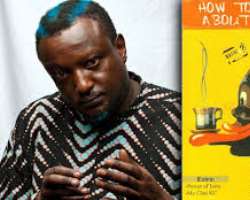 Kenneth Binyavanga Wainaina is dead. He died at his house in Nairobi. He died on 24th May 2019, he died of HIV related complications. He died at the age of 48 while still working on how to enter into a homosexual marriage as a he-wife to a male spouse from Nigeria. He is the author of a very wonderful memoir; One time I will Write about this Place, he is the founder of the Literary Journal Kwani, he has also written very many enticing essays for Granta Magazine, the London Guardian. How to write about Africa is one of the essays he wrote in the Granta Magazine.

His memoir also contains a story that earned him a locally coveted Caine literature prize for African writings in English.Binyavanga’s facebook posts and his crude physical appearances on the Face-book home page could not be avoided. He has been a celebrated Queer writer with significant digital presence and very huge followership on the social media. It is this aggressive digital hovering that also brought Binyavanga into unflagging literary and artistic friendship with Chimamanda Ngozi Adichie.We shall miss you Kenneth, and as well, many from all over the world will miss your unique writing style that commands spectacular simplicity.

Binyavanga is not only a child of luck as Dr. Joyce Nyairo has tweeted on learning about his death. He is also a child of immoral manoeuvres, tribal cross-breeding and unwavering fate. Fate which took its strong course when Binyavanga deliberately become a man of cheaper choices in his early adulthood days as a student in South Africa. His childhood life in Kenya was socially quality, well parented and morally protected. He colourfully narrates this in his memoirs that his father always bribed his ways through to ensure that Binyavanga gets a chance to do his form five and form six at the Mang’u schools, a national school that Binyavanga never qualified to join.

It was through bribery and other the immoral manoeuvres by his father that Binyavanga got a chance to join Kenyatta University. But unfortunately, genetic fate betrayed him, he never had the facultative and behavioural potential to go through the rigorous academic requirements for a degree course, courtesy of those academic good times when the quality in Kenya’s university education was not yet watered down with the culture of academic dishonesty known as Mwakenya. Ultimately, Binyavanga was to drop out of Kenyatta University and only to look for a cheaper academic alternative in South Africa. But fate remained un-flagged, it still proved impossible for him to go through the mental commitments needed for earning a degree in South Africa. This was as real as evinced in the final eventuality that Binyavanga was not able to complete his degree course in finance at Transkei University. Nothing else held back Binyavanga from completing his degree course other than very cheap choices he made for himself to indulge into heavy drinking of cheap alcohol, cigarette smoking, marijuana smoking, financial indiscipline and extensive involvement in multiple homosexual relations. Binyavanga himself has clearly mentioned most of this failures he registered in his memoir, One Time I will write about this Place.

Binyavanga was not born a homosexual and HIV positive. He grew up a health and handsome man. He went to school in total physical fitness. In spite of his intellectual incapacities, he was an avid reader of James Hadley Chase, Danielle Steele, Robert Ludlum, Jeffery Archer and Frederick Forsyth. His favourite African writers were strictly Kikuyu writers. And obviously, they were Ngugi wa thiongio, John Kiriamit, Meja Mwangi, Rabbecca Njau, Mwangi Ruhen and the Kibera brothers.

Several and very reliable authorities on Binyavanga have also shown that he enjoyed the themes of Pornography in David Maillu’s After 4.30 and My Dear Bottle. This avid zero-grazing on the American popular fiction and Kiguyu literature hampered Binyavanga from discovering Wole Soyinka, Alex Haley, Frantz Fanon, Albert Camus, Jean Paul Sartre, Paulo Freire, Simone de Beauvoir and very many other socially meaningful writers in the likes of Aime Ceasaire, Amilcar Cabral and Fydor Dostooyevsky and so forth. That is why while in South Africa, Binyavanga did not have the intellectual machinery that could light his way towards the discovery of J M Coetzee, Nadine Gordimer, Fatima Meer and so forth. But above all else his early reading of Hadley Chase gave him a knack for simplicity in writing as a literary virtue.

Thus, it is to be inferred that while in South Africa, Binyavanga never made any good intellectual progress. He only discovered male homosexuality, got involved into it and then perfected his art of cigarette and marijuana smoking alongside dedication to alcohol drinking. This is how Binyavanga got infused with HIV viruses. It was so unfortunate to his mother and father, they took him to South Africa for university education, but he did not come back with education. He came back with what the society does not need, Homosexuality not only to mention multiple strained HIV. It is so sad that it was not only Binyavanga that succumbed to the social darkness in the streets of Johansburg.There are very many young people from Kenya and other countries in Africa that are socially languishing in drug addiction, commercial homosexuality and cheap alcohol consumption in in the cities of South Africa.

It is at this Juncture that the South African Society has to be faulted. Political independence from Apartheid was not enough. There are other forms of social slavery that the social and political institutions in South Africa have to fight against in order to restore normalcy in the social life of South Africa. South African society must be restored to its original status of being an African society. What I mean is that there is a lot of sexual freedom and licence among the youths in South Africa, lesbianism and other forms of commercial homosexuality is publicly appreciated as a democratic front in all the towns of South Africa, drug abuse among the youths is substantially evident, family values disappeared, most of the children are being brought up by single mothers and single-grandmothers, immorality is rampart, prostitution is off-the-graph, divorcing is at the wild rate. I mean, where is the role of a father in a South African family?

I am not anti-Gay, but I am not for a society that cannot boldly correct any corrigible socially deviant behaviour. Homosexuality is not to be glorified through constitutional amendments, statutes, human rights activism and literary prizes. But instead, homosexuality must be accepted as a psycho-medical problem to be corrected. This is why I object to the choices of the Fortune Magazine and the Caine Prize organization for recognizing and prizing Binyavanga because of his writing in prize of Homosexuality and choosing to live a public life of a person who is openly a male homosexual being used as a woman by other men. It all the Fortune Magazine was serous then it was bound to look around for good and morally upright young writers in Africa that could be listed. Otherwise what the Fortune Magazines did through Binyavanga was a cultural cajole and Africa was a victim. Why Binyavanga was listed by the Fortune Magazine as of the 100 people from Africa that is influential and very promising in leadership was a simple explanation that Western institutions often use their wealth and other economic advantages to monkey-wrench the moral sobriety that African societies have always struggled to preserve.

Back to Binyavanga. He was a son of a Rwandese mother and Kikuyu father. His Binyavanga is from Rwanda. However, Binyavanga was very intolerant to tribal otherness in Kenya. He only loved his fellow kikuyu tribesmen. He distasted all other Kenyan tribes with all his literary and digital strength. He hated the Luo most for observing the culture of male un-circumcision. What Binyavanga wanted in a circumcised Luo penis is best known to himself. According to Binyavanga’s latest essays on Granta Magazine, democracy and good governance in Kenya is only there when a Kikuyu is the president. But it is total dictatorship when a kikuyu is not the President. Why Binyavanga and very many other public intellectuals from the Kikuyu community chose to nurture such like political thoughts in a multi-ethnic and Multi-racial community like Kenya is a question to be discussed on another day. But the pertinent question is this, Binyavanga was a man of culture. His death is a monument of cultural discourse. The Kikuyu is a community that is very rich in rituals of burial. We want to see how it will set the cultural pace for other African societies on how to bury an adult Kikuyu Gay man who had chosen to be used as a woman by other men.