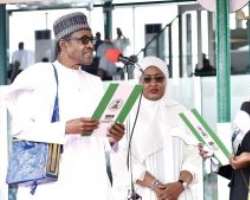 Buhari   left the venue immediately after inspecting the guards of honour and acknowledging cheers from the crowd with any address to the people.

As has been the tradition, the President was expected to speak to the nation on what would be the focal points of his new term and what he would do differently especially in the face of mounting challenges  and growing divisions in the country.

Many guests at the Eagle Square venue in Abuja were apparently not impressed upon realising they would not be hearing from the leader.

As he inspected the parade comprising officers of the Army, Navy, Air Force and Police, Buhari pumped his fist in the air in salutation at Nigerians who had come to watch the event. Many of the guests however did not wave back.

Four years earlier, when he took the mantle of office from former President Goodluck Jonathan, Buhari had given a string of promises amid a huge fanfare.

However, some opposition parties led by the Peoples Democratic Party faulted the President's decision not to use the occasion to address Nigerians. They described it as disrespectful, adding that Buhari's action was a confirmation that the President had nothing new to offer the country.

The absence of former presidents Olusegun Obasanjo and Goodluck Jonathan was conspicuous, but two former heads of state, Yakubu Gowon and Abdusalam Abubakar, were at the ceremony.

Also in attendance were the Senate President, Bukola Saraki; Speaker of the House of Representatives, Yakubu Dogara; the Chairman of the All Progressives Congress, Adams Oshiomhole; National Leader of the party, Bola Tinubu; a former Senate President, Ken Nnamani; a former of Minister of Information and Culture, Lai Mohammed; a former Secretary to the Government of the Federation, Boss Mustapha; Ekiti State Governor, Dr Kayode Fayemi, chieftains of the APC and some members of the immediate past cabinet of Buhari.

For failing to take advantage of such a prime time to address Nigerians, the President has been a subject of knocks and harangue.

The opposition Peoples Democratic Party (PDP) set the tone in condemning the development,  saying it was a tacit admission of guilt that the election was rigged.

“The failure by President Buhari and the All Progressives Congress (APC) to make any commitment at the ceremony reinforces the truism that a product of flawed electoral process cannot serve the people or meet their aspirations under a constitutional democracy,” the party said in a statement by its national publicity secretary, Kola Ologbondiyan.

It noted that the “poor attendance and passivity of the audience at the ceremony at a time that Nigerians were trooping, in their millions, to the inauguration of state governors elected on the platform of the PDP is a further evidence that Buhari and the APC were not elected.

“It is indeed pathetic that at a ceremony such as presidential inauguration, where truly elected leaders address their people, make commitments and unfold their governance direction, President Buhari did not showcase his plans or commitment to the development of critical sectors of our polity. It also speaks volumes that President Buhari had nothing to say to the victims of mindless killings and acts of violence in various parts of our country.”

Also, The National Chairman of the PDP, Prince Uche Secondus, said the occasion offered the President an avenue to appreciate citizens for their patience and perseverance since he assumed office four years ago.

He spoke to correspondents of The PUNCH.
He said, “Millions of Nigerians and others who were glued to their television sets and those who were also at the Eagle Square must have been sad with the silence of the President. Definitely, his silence was not golden.

“Many Nigerians were killed in the last four years, hundreds lost their jobs, pensioners not paid and we also lost our sons and brothers in the armed forces as a result of the terror war.

“Hearing words of assurance and comfort from their commander-in-chief would have served as the needed tonic and also as the expected balm that would attempt at healing their wounds.

“But instead, what did they see or hear from a man they have expected so much from? Nothing! Maybe he felt he owed Nigerians nothing.”

Also in  an interview with The PUNCH, the SDP's National Publicity Secretary, Alfa Mohammed, said the President might have also acted in accordance with the sadness he alleged was pervading the country.

He said, “You only appreciate people when you are sure that the people's efforts put you in that position. The President might think that he did not owe Nigerians any appreciation and so did not express appreciation.

“The current mood in the nation is not that of celebration. He might have also caught the bug of the sadness pervading the country. There is poverty and insecurity among others.

“People are afraid to travel home now. I think Nigerians are not in the mood for any celebration and the President is probably aware of this too.”

Also, the ADC's National Publicity Secretary, Yemi Kolapo, said the President must have refrained from giving a speech because he had no plan for Nigerians.

She added that Buhari could have also decided to keep mum because he knew that his election was still being contested at the tribunal.

Kolapo said, “He might have also refused to give any speech because he realised that it is a stolen mandate, the court has not cleared him and so he did not want to jump the gun.”

Chief Goddy Uwazuruike, President Emeritus of Igbo think tank Aka Ikenga, described the development as “strange” and “shocking”. According to him, “governors read their speeches and asked the people to look forward to something that gave people hope and food for thought. The only person who didn't give us food for thought was the president. I think something is wrong; he is the most important person here.”

Human rights activist and coordinator, Otoge Lagos, Mark Adebayo, said it was an unprecedented indiscretion in Nigeria's political history. He told The Guardian: “A presidential speech at inauguration is the norm in all civilised democracies all over the world. It's not just a national disgrace, but also an international embarrassment for the country.

“The president did not say anything at a time the citizens are under extreme economic and security pressure and in desperate need of reassurance. He has failed us totally. It is the same insensitive indiscretion he displayed by refusing to debate with his opponents before the 2015 and 2019 elections despite national outcry against such a practice.”

The truth behind the president's failure to make a speech, according to media expert, Alex Ogundadegbe, is because “he doesn't know what to tell Nigerians this time. He now understands the mood of the people about his governance. We have more bad news than good news. Look at the level of insecurity, unemployment, even the Central Bank of Nigeria (CBN) governor has warned that the country might enter into recession again.”

During a live television programme, Akin Oyebode, Professor of International Law and Jurisprudence at the University of Lagos (UNILAG), said the president missed an opportunity to administer a soothing balm on the citizenry by giving them “some impression of hope.”

A chieftain of rights group National Democratic Coalition (NADECO), Dr. Amos Akingba, argued: “I'm not even sure that there would be a speech on June 12. June 12 is different from the time you take the oath of office; when you should promise the people, tell the people, inform the people what you want to do. You don't have to wait till June 12. June 12 is just a recent approval. Today is the day you took an oath of office; you're inaugurated. Let us know what your agenda would be.”

Lai Oso, a professor of Mass Communication, UNILAG, said he was surprised, adding: “Perhaps, he feels he said enough during his interview with NTA.”

The Director, International Press Centre, Lanre Arogundade, said it was sad that government appeared muddled up over May 29 and June 12. “If we are saying June 12 is Democracy Day, then why didn't he do the necessary amendment to the law? I think the confusion is having May 29, and also having June 12 as Democracy Day. We should have a fixed day, so that when a president is inaugurated, he or she makes a speech on the inauguration day,” he said.

But NADECO's general Secretary, Ayo Opadokun, felt there was little to worry about. Buhari didn't want to glamourise May 29 any longer, he explained. According to him, “The president and his handlers deliberately saved the speech for June 12, when the country will actually celebrate Democracy Day. If the president had made any speech yesterday, what else would he have said on June 12 after promising he would celebrate May 29 low key?”

A former deputy national chairman of the PDP, Olabode George, said the president didn't want to “start making promises when he is still uncertain about the outcome of the election tribunal looking into the petition challenging his victory in the presidential election.”

Urging Nigerians not to crucify the president, he added: “It won't be ideal for Buhari to start making another round of promises to Nigerians now when he still has many unfulfilled promises he made in his 2015 inaugural speech.”

Although it was tagged 'low-key', Buhari and his vice president, Yemi Osinbajo, took the oath of office in a brief ceremony full of pomp.

Security at the venue and around the Federal Capital City was beefed up. Men of the strike force unit of Nigerian Army in balaclavas took positions atop major high-rise buildings around the venue. Police dogs and anti-bomb trucks manned strategic locations to ensure there was no breach.

The president arrived at the Eagle Square at exactly 10:00 a.m. accompanied by his wife, Aisha. He went straight to the dais for the national anthem, marking the commencement of the ceremony, before retiring to his seat in the VIP cubicle.

The vice president alongside his wife, Dolapo, and other senior government officials including Speaker of the House of Representatives Yakubu Dogara, Senate President Bukola Saraki were already seated before Buhari's arrival.

Osinbajo, who arrived at the venue at about 9:35 a.m., also mounted the dais for the national anthem, which was played halfway. He however gets the full anthem whenever he represents the commander-in-chief.

.with The Guardian and The Punch reports