Pope Francis predicts his papacy will be brief 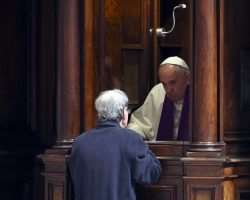 ROME — On the second anniversary of the start of his papacy, Pope Francis announced that the Roman Catholic Church would mark an extraordinary Holy Year in December, though he might not be celebrating many more anniversaries in the future.

“I have the feeling that my pontificate will be brief — four or five years; I do not know, even two or three,”  he predicted in an interview with a Mexican broadcaster. “Two have already passed. It is a somewhat vague sensation,” the pope said, reiterating his belief that “the Lord has placed me here for a short time, and nothing more.”

Leaving open the possibility that he might follow in the footsteps of his predecessor, Benedict XVI, who became the first pope to step down in 600 years when he did so in 2013, the pope said Benedict “should not be considered an exception, but an institution.”

The chatty interview with Mexico's Televisa News was in keeping with Francis's outgoing manner and personal touch — from the cold-calls to faithful who write to him sharing their sorrows, to his off-the-cuff avuncular advice. His predecessors dispensed their personal musings sparely, and rarely through the mainstream media.

In the interview, Francis confessed that what he missed most since becoming pontiff was being able to “go to a pizzeria for a pizza without anyone recognizing me.”

The pope also discussed global trends in migration, and the plight of refugees fleeing poverty, hunger and wars. He also cited reasons people are abandoning the Catholic Church, including “disastrous” homilies that “do not reach the heart.” The interview also included comments about the contentious reform of the church's Roman bureaucracy and of the shame of the sexual abuse of minors by priests.

Vatican Radio posted  a translated transcript  of the Spanish-language interview.

In an announcement at a ceremony in St. Peter's Basilica on Friday, the pope said the church would celebrate a Holy Year, summoning pilgrims to Rome and other religious sites, that would commence on Dec. 8 and conclude on Nov. 20, 2016. The opening of the Holy Year, or Jubilee, as it is also known, coincides with the 50th anniversary of the closing of the Second Vatican Council, the gathering of bishops that set the church's course for the future.

This will be the 29th Holy Year since the practice began in 1300. They usually take place every 25 years.