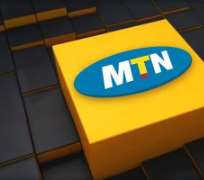 The share price of MTN on Nigeria's bourse soared by 21 per cent in two days, closing at N108.90 on Friday.

The telecommunications giant, which is the only one listed in the sector by the Nigerian Stock Exchange gained the maximum 10 per cent each on the two days of trading. It was initially listed at N90 on Thursday.

The stocks have now passed the N2 trillion mark. The interest in the stock was not dampened, even with the news that the company had signed a N200 billion loan agreement with a consortium of banks, for a seven year tenor.

Citibank will act as coordinator of the loan and Quantum Zenith will act as Facility Agent in the loan provided by seven Nigerian banks.

It followed the successful establishment of a similar 7-year N200 billion facility by MTN in 2018 and formed part of the company's wider programme to raise domestic debt, he said.

Other stocks that gained on Friday were Betaglass, Cutix, Oando, Transcorp and Access Bank. None had the leap of MTN.

Conversely, Mobil recorded the highest loss, dropping by N4 to close at N170 per share.

In spite of the growth posted by market indices, the volume of shares traded closed lower as investors bought and sold 267.84 million shares worth N7.52 billion in 3,684 deals.

Transnational Corporation of Nigeria was the most active stock during the day, exchanging 58.59 million share worth N72.25 million.

Market capitalisation of the exchange inched N192 billion or 1.53 per cent to close at N12.718 trillion against N12.526 trillion achieved on Thursday.