Nigerian Appeal Court President Must Disqualify Herself As The Appointer, Presiding Judge, Regulator And Determiner Of The Presidential Poll Tribunal & Its Expected Outcome 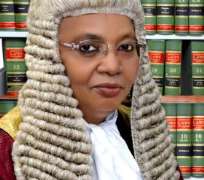 Nigeria: 17th May 2019: The Int’l Society for Civil Liberties & Rule of Law is strongly warning on legal and moral consequences or damnation of allowing the President of the Court of Appeal, Hon Justice Zainab Adamu-Bulkachuwa, as the appointer, chair, tele-guider, regulator and determiner of the 2019 Presidential Poll Tribunal, its members, proceedings and expected outcome. If these are allowed, then justice in the instant case is not only already murdered but also seen to be murdered before its official pronouncement. Nigerian Judiciary must also not be allowed to descend to the judiciary of a militia state.

Morally speaking, the arrogation (claiming a position unwarrantably or presumptuously or assuming or appropriating same to oneself without a right) by the PCA to herself the morally overbearing and extra constitutional titles of the appointer, chair, tele-guider, regulator and determiner of the 2019 Presidential Poll Tribunal, its members, proceedings and expected outcome is not only morally despicable but also a fundamental breach of the cardinal principles of the natural justice-particularly the hallowed principle of nemo judex in causa sua (no one should be a judge in his or her own case).

The action of the PCA also offends and undermines the principle of and right to fair hearing or audi alteram partem (let the other side be heard with full ingredients of fair hearing and fair proceedings) to the parties in the presidential poll tribunal particularly the plaintiffs. The adamancy of the PCA in refusing to recuse or excuse or disqualify herself from the instant case because of a potential conflict of interest or lack of impartiality is not only a clear testament of self moral damnation, but also shows that the matter in question is already determined with buying time or camouflaging proceedings.

The PCA as a “learned judge” ought not to have waited to be reminded or called upon by Nigerians of moral and democratic conscience to hands off the matter in question or excuse herself from same. If truly she is a learned judge and a moralist, she should have done the needful ab initio without waiting to be called upon to do so. Her insistence on hanging on as “self appointed chairman or presiding judge of the 2019 Presidential Poll Tribunal” and at the same time President of the Court of Appeal, has already caused a serious integrity harm on the proceedings of the Tribunal and its expected outcome; such that the outcome is most likely to be widely viewed as roguish and product of judicial robbery and remote control.

From our vast knowledge of the rule of law including modern principles guiding the natural justice, it is both morally and legally forbidden for a head of sub judicial organ (Appeal Court) to play the role of appointing, chairing, teleguiding, regulating and determining authority in the constitution of criminal and civil courts and their proceedings, trials and outcomes; not to talk of presidential election tribunal set up and tasked to determine the validity or otherwise of the electoral body’s declaration of a presidential contestant as a winner and another or others as a loser or losers.

Constitutionally speaking, the PCA appoints chairmen and members of the Presidential/National Assembly, the Governorship/State Assembly and the FCT Election Petitions Tribunals. These are clearly spelt out in Section 285 of the Constitution of the Federal Republic of Nigeria 1999 as amended (under Part 111). By sub section 3 of the Sixth Schedule in the Constitution, governed by same Section 285, “the Chairman and other members of the (Presidential) Election Tribunal shall be appointed by the President of the Court of Appeal (Hon Justice Zainab Adamu Bulkachuwa) in consultation with the Chief of the State, the Grand Kadi of the Sharia Court of Appeal or the President of the Customary Court of Appeal of the State, as case may be”.

Present Post Election Petitions and their tribunals are structured in Nigeria into three categories with stipulated time-frames; out of which the Governorship petitions have the longest time-frame of ten months with three-step court stages (tribunal or court of first instance-six months, appellate-two months and apex or supreme court-two months), followed by Presidential with eight months period and two-step court stages (tribunal operated at Appeal Court level, lasting for six months and Supreme Court as final arbiter lasting for two months). The third category is the National/State Assembly Petitions with two-step court stages lasting for six months at the court of first instance (tribunal/high court) and two months at the court of last instance or Appeal Court.

While the 1999 Constitution as amended is literally silent by not mentioning “Presidential Election Petition Tribunal” in its Section 285, Section 133 (a) of the Electoral Act of 2010 as amended under Part 111 (Determination of Election Petitions Arising From Elections) made specific mention that “in the case of Presidential Election Petition, the Court of Appeal assumes original jurisdiction or commences the proceedings as “court of first instance”. Also by Section 145 (2) of the same Electoral Act of 2010 as amended, “the President of the Court of Appeal may issue practice directions (rules and regulations) to the election tribunals”.

From the foregoing, therefore, it is clearly unarguable, both legally and morally that the PCA, Hon Justice Zainab Bulkachuwa has made herself an interloper, usurper and a judge in her own case. Morally, she has no business sitting and presiding over in a matter she circumstantially has deep and seemingly inseparable conflict of interest (hail from APC family and married to chronic APC card-carrying member/Senator-Elect). Legally, the PCA also has no legal and constitutional business sitting and presiding over the same tribunal she appointed its members and made rules and regulations guiding its proceedings.

As an appointing authority and PCA, Hon Justice Zainab Bulkachuwa cannot turn around and appoint herself into membership or as presiding judge of the same tribunal and members she appointed at the first place. This is totally unheard of in the judicial history of a progressive democratic state, except in a judiciary of a militia state. Our deepest worry is that the continuing presence of Hon Justice Z. Bulkachuwa in the 2019 Presidential Tribunal, if allowed; whether as a panel member or as its presiding judge or chairman, will incurably dent and soil the outcome of its proceedings, thereby throwing a spanner in the advancement of the country’s democracy and rule of law. The PCA, therefore, must recuse herself without further delay!

Intersociety also calls on the Presidential Election Petition Tribunal to dismiss and strike or throw out any motion or application before it seeking to stop the inauguration and swearing in of President Muhammadu Buhari on 29th May 2019. Such motion or application is vexatious, injurious, over ambitious and undemocratic. It is also a clear breach of the 1999 Constitution and principles of the rule of law as well as relevant provisions of the Electoral Act of 2010 as amended.

Section 75 of the Electoral Act is very clear and unambiguous on issuance and invalidation of the Certificates of Return to all election contestants declared winner by INEC and administering of oaths of office and allegiance to bearers of such Certificates of Return including President Muhammadu Buhari and his Vice, Mr. Yemi Osinbajo. In the case of President Buhari and his Vice, Yemi Osinbajo, it is only the Supreme Court of Nigeria that can invalidate or revoke their Certificates of Return and oaths of office and allegiance, if judicially found to have been roguishly declared winner (s) of the 2019 Presidential Poll by INEC.

By amended relevant provisions of the 1999 Constitution (as amended) and the Supreme Court decision in Peter v INEC & Ors (2007) over running of tenure of office of the Governor/Deputy Governor/President/Vice President, “four years tenure of such public office holders starts counting from the day of swearing in or administering of oaths of office and allegiance”. Nigerians, particularly the public office holders and seekers, are therefore advised strongly to stick to due process and rule of law at all times.