Bosso Village Train Derailment And The History Of The Nigerian Raiway Corporation. 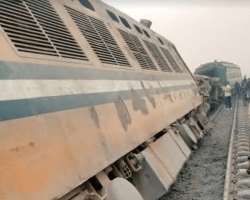 THE Monday 6th May, 2019 ill-fated derailment of Lagos-Kano bound passenger train at Bosso village in Niger state, was unfortunate and would have been avoided, if authority of the Nigerian Railway Corporation(NRC) were responsive to their duties for the routine maintenance of rail tracks, locomotive engines and other facilities of the corporation for safe and effective rail transportation service in the country.

The problem the 17 coach passenger train wagon had before the derailment emanated from Iddo head quarter terminus in Lagos from where it took off.

I boarded the train in Ibadan station for an annual vacation to Agadez through Kano. Eye witness account of passengers on the train revealed that the train scheduled to depart Lagos by 9.00am on 3rd May 2019, did not take off until about 4.00pm in the evening.

Angry passengers on board the train also narrated that the journey was disrupted at Itori in Abeokuta, when the pulling locomotive diesel engine developed problem. The replacement of the engine from Lagos took many hours and the passengers slept over night in the bush with hardship. The replaced engine from Lagos they said had low power or capacity to pull the passenger wagon.

The Ibadan railway station received the report of the train late in the night and immediately detailed its locomotive engine meant to convey a freight wagon to Kaduna to Abeokuta that Friday night to pull the passenger wagon to Ibadan where crowd of passengers waited and slept over night to board the train.

Many of the passengers mostly National Youth Service Corps members with urgent official assignment to attend to in their different stations up north left the station early morning Saturday for motor parks to embark on their journey by road.

The train eventually arrived Ibadan on Saturday 4th May, 2019 by 10.00am and did not leave the station until about 1.00pm after the engine and coaches have been thoroughly checked.

The cause of our delay for long hours close to Iwo was not known, but concerned passengers who noted our locomotive engine wanted to be swapped with a bad engine were not happy and did not take it lightly with the NRC officials involved. The passengers protested to the NRC officials traveling with the train and their response to the plea of the passengers after the intervention of officials from the station in Iwo safe the ugly situation.

The train got to Osogbo at about 4.00pm and took off 30 minutes later. It was the quick observation of the engine driver that saved the derailment of the train in Erunmu on our way to Offa.

We learnt the train track across a road junction in Erunmu had earlier been vandalized by the passage of a heavy motor vehicle truck and the repair was left unattended to by the NRC.

The static motion of the train baffled the passengers, they came down to see what the matter was. Many joined hands with the train officials to put right the train track to enhance a hitch free passage of the wagon. The tedious work lasted till about 7.30pm in the evening that very Saturday.

We arrived Offa station safely. The journey from Offa to Ilorin was smooth, it was however getting late into the night. We got to Jebba almost 6.00am on Sunday 5th May, 2019. We travelled all through the day but was delayed at a pparticular station for quite a long time that lasted the whole day.

We spent the night traveling and got to Mokwa by 7.00am on Monday 6th May, 2019 with great hope that we should arrive Minna before 2.00pm in the afternoon.

It was about 1.00pm in the afternoon at Bosso village very close to Minna, passengers in great panic trouped out of the coaches, many forced their way out through the windows, others scrambled and got out through the doors and walked towards the locomotive engine in the front of the wagon to see what happened.

The engine though on the rail and was still working had its rear coupling or joint with the passenger wagon disengaged, the two first class executive air conditioned coaches adjacent to the engine fell on their side off the rail into the ditch and pulled off the rail the front wheel of the economy class coach of the wagon.

Though there was no life loss in the mishap, the presence of NRC Red Cross First Aid group with personnel and medical equipment as accomplice with the wagon to rescue and safe life was not felt.

Before outside help eventually came, compassionate passengers rescued victims, while the NRC officials accompanying the train did all they could to render first aid and prevent loss of lives.

Many passengers travelling far north with light baggage, trekked long distances, others took motor cycles from the village to the main road for vehicle to take them to the city in Minna where they hoped to continue their journey.

Many of the passengers mostly traders and aged with heavy baggage or limited by the worries of their children waited there at the scene of the accident for help from officials of the NRC.

Amongst the modern system of transportation available in Nigeria and indeed the world today, the train is still seen or considered as the cheapest and safest means of transportation by traders, low and middle income classes of people.

Their intention to construct rail roads, establish railway stations and service across the country was to enable them transport farm produces and mineral resources from rural farm areas in villages where they were produced and mined in the country to the sea ports in Lagos or Portharcourt for export to Britain to serve as raw materials for the growing home industries at the wake of the industrial revolution era in Europe at the time.

The history of the establishment of the Nigerian Railway dates back to the British colonial rule in 1898, when the first rail road was constructed from Lagos to Ibadan.

The rail road was later extended to Minna , where it joined with the Kano rail line built by the then government of the Northern region. The two rail lines was amalgamated in 1912 and became the Nigerian Department of Railways.

Between 1958 and 1964 the East line railway was extended and the Maiduguri rail terminus for the north East was established.

Nigeria does not have railway transportation link with neighboring countries like: Benin, camerouns, Togo, Chad or Niger republic as their track gauge is different from that of Nigeria.

In 1964, four years after independent, lack of maintenance of rail lines, locomotive assets and poor management of the NRC reduced the capacity and utility of the rail transport system in the country.

Nigeria started its train operation with the coal or steam locomotive engines and today, the county operates with diesel locomotive engines. Apart from long distant rail service, the corporation operates short distance local train service for workers and traders between Lagos and Abeokuta.

The NRC has about 200 diesel locomotive engines, many purchased long ago in 1993 are obsolete and are not functioning, the corporation owns 56 shunters, 480 passenger first class and economy coaches and over 4,900 freight or cargo wagons many of which are said to be in poor condition for use.

In 1988 NRC went bankrupt for a period of two decades. Initially, rail services was grounded for six months but later resumed where tracks were useable, but this did not last for long as train service totaly stopped in 2002. People however attribute the corporation's bankruptcy to corruption, poor management and unconcerned political will of leaders in power at the time.

In 2006, government re-organised the NRC and restored the rail lines, bought new locomotive engines and seeked foreign supervisory assistance to develop the corporation.

The rehabilitation of the NRC by government to improve efficiency and profitability continued in 2009. The abandoned Portharcourt -Maiduguri rail line was restored by a Chinese company. In 2012 regular scheduled passenger train service from Lagos to Kano was restored.

A statistics of train service in the country indicate that in 1964 about 12 million passengers boarded the train and this reduced to 1.5 million in 2003. Again, freight or cargo transportation service of the corporation reduced from 3 million in 1964 to less than 100,000 tonnes at the turn of the century.

The present administration of president Muhammad Buhari has promised to revive and support all abandoned rail projects in the country as effort of government to develop and improve rail transportation system in the country to meet the need of the people and generate more revenue for the government.

Towards this end, the NRC in 2017 generated a total revenue of about 4.1 billion naira. Authority of the corporation affirmed that it will eventually break even to make profit on the Kaduna -Abuja newly completed and commissioned rail service whose monthly running cost is about 100 million naira.

President Buhari to achieve government goal on the development of the country's rail system has set up a 26 member board to advice and supervise the smooth running of the NRC.

Traveling by train one observes that NRC has abandoned the use of facilities for track change and safety, the repairs of tracks vanderlized are not given prompt attention they deserve, buildings ment for staff housing and storage houses for goods built long ago during the colonial era have become dilapidated, many of the erected staff houses are inhabitable and poorly managed for use. Many train facilities are seen abandoned there in the different stations rusted and over grown with weeds and scraps of derailed cargo wagons lie in bushes along the rail lines.

The NRC under the watch of the current Managing Director, Engineer F.Okhiria must work hard to upgrade the standard of rail transportation system in the country to assure safety, comfort and increase revenue generation for the government.

I solicit that for safety and to prevent over crowding and scrambling for seats which result in fight, the NRC must introduce a train ticket booking system mandating travelers to use their national identity cards or any other means of identification. A manifesto or list of train travelers will curb banditry or other vices associated with train transportation. I will also like to suggest that to avoid overcrowding and the problems associated with it, the NRC should create special traveling time or train service for traders or passengers traveling with heavy loads and create executive train service for light baggage travelers.

The NRC must as a matter of urgency provide a large hall with carpet spread in all stations over the country and little token charged for long distant train travelers who are compelled by any circumstance to pass the night at the station, this will generate income, enhance safety and ensure good security in all railway stations in the country.

NRC museum will attract revenue if it is developed and updated to intenational standard to attract foreign tourists and local visitors, physically portraying the long journey, history and development of railways in Nigeria pre and post independent.

The NRC must train and retrain their existing staff, motivate the hard working staff with promotion, rehabilitate abandoned government houses in all stations of the corporation to ease staff accommodation and recruit more trained staff in the supervisory and technical cadres to revive the lost glory of NRC.

Engineer Okhiria was appointed the Managing Director of the Nigerian Railway Corporation in 2016.

Since he assumed office, Engineer Okhiria has faced series of court orders instituted by Lagos state people in the corporation’s bid to demolish buildings to construct new rail lines to improve rail service in the state.

He is a member of several professional bodies and has traveled extensively. Mr. Okhiria is a devout Christian, loves sports and is happily married with children.