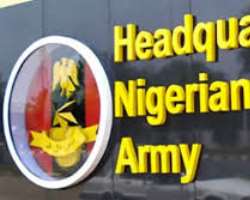 Troops of the Nigerian Army have rescued 54 Boko Haram kidnapped persons in Borno, including 29 women and 25 children.

Col. Sagir Musa, the Acting Director Army Public Relations, in a statement said the victims were freed after troops cleared Ma’allasuwa and Yaa-Munye villages in the state.

He added that the terrorists fled from the troops’ onslaught and abandoned their victims.

In another development, Musa disclosed that a Mobile policeman, Sgt. Markus John, with number PNo 383106 was arrested at Njimtilo check point along Maiduguri-Damaturu road, while on transit to Lagos.

He said that at the time of arrest, John was in possession of two magazines, 146 rounds of 7.62 mm Special ammunition and one round of anti aircraft gun concealed in his bag.

He alleged that they were in possession of one disassembled AK 47 Rifle.

Musa restated the army’s appeal to the public to continue to provide useful information about suspicious movement of terrorists and criminals.