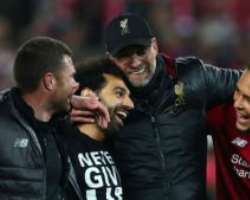 Last season’s runners-up Liverpool overturned a 3-0 first-leg deficit to reach the final with an incredible 4-0 win against Barcelona at Anfield on Tuesday.

Klopp is yet to win a title since moving to Liverpool – who are a point adrift of Manchester City heading into the final Premier League match of the season – in 2015 but the German revelled in the club’s memorable comeback.It’s really not about me, it’s really about the club,” said Klopp, whose Liverpool will face Tottenham in the June 1 final. “We all have to make the best of the circumstances that we have. That’s what we try. If that leads to silverware then wonderful, but we cannot do more.

“This season has been a year full of wonderful moments together. Looking forward to games, enjoying games and last Tuesday was the icing on the cake so far. Wow. That’s exactly the picture we want to draw for the outside world – this is Liverpool, it’s possible here, it’s possible in this club and in this city with the people around. That’s the picture. A moment like this is worth more than silverware.

“The job is to develop as far and as high as possible so it gets more and more likely that you win silverware and that’s what we’ve done so far. Now we go to a final and we’ll play it, learn from the past few years and see what we can do there. Sunday is our last Premier League game. It’s not in our hands what we get but it doesn’t make our season a little bit less good. It’s just a different finish.”

Liverpool will play Wolves in the final Premier League match of the season on Sunday as the Reds eye their first league crown since 1990, with leaders City away to Brighton and Hove Albion.