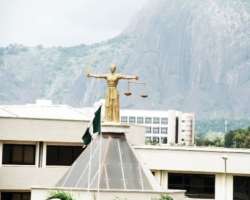 
ASABA, June 16, (THEWILL) – The Deputy Speaker of Delta State House of Assembly Mr. Basil Ganagana and its Clerk, Mr. Raymond Yavbieri have been subpoenaed to appear before an Abuja Court of Appeal on July 6, 2010 to give reasons why an order of committal should not be made on them.

The Court had granted an order of application brought before it against the House Deputy Speaker and Clerk by the member elect representing Ika South Constituency in the House, Mr. Kingsley Phillips who was declared winner of the 2007 House of Assembly election by the court of Appeal sitting in Abuja.

Mr. Phillips had sought the relief of the court to be sworn in as a member of the House as directed by the appellant court.

The order pasted on the gate to the House of Assembly complex Asaba on Tuesday with Appeal number CA/A/147/07 which was signed by Deputy Chief Registrar of the court, Ijeoma Nwobia reads "This application is granted as prayed, leave is hereby granted for the form 49 notice to show cause why an order of committal should be made on the parties sought to be committed, be served by pasting same on the gate Delta State House of Assembly".

The House which had gone on three weeks recess after its inability to swear in the member elect could not resume yesterday (Tuesday) as scheduled after a postponement to June 22, 2010 with reasons given that to enable the leadership of the House join other state Houses of Assembly as the National Assembly present copies of the amended constitution to them for consideration and to also enable members participate actively during President Goodluck Jonathan's one day visit to the state on June 19, 2010.

It would be recalled that last week during a press briefing at the House of Assembly complex, Mr. Efe Akpofure, SAN, counsel to the sacked Speaker, Okonta and Clerk of the House, Mr. Yavbieri had insisted that Mr. Okonta remains the Speaker of the House adding that the Clerk has no Constitutional right to swear in Mr. Philips till the suit filed by the embattled sacked Speaker is disposed of.

According to Mr. Akpofure (SAN) his clients had filed a motion at the Appellant Court to allow the status quo in the House to remain. "Until the motion is disposed of Hon. Okonta remains the Speaker of the Assembly it is only the Speaker and not the Clerk of the House that can swear in a member of the House in accordance with constitutional provision".

But in a swift reaction, Mr. Philips vehemently countered Akpofure's statement as according to him, Mr. Akpofure is only a lawyer but not a Court of Law and is merely "working for the N4 million legal fees he collected from Okonta".

In an unrelated development, the state government has beefed up security in the state to ensure that President Goodluck Jonathan’s one-day working visit is trouble-free.

THEWILL learnt that about 3,000 policemen have been deployed in the state by the State Police Command while other security agencies have also been mobilized for the Saturday, June 19 visit.

Chairman of the Committee on the President’s visit and Secretary to the State Government (SSG), Dr. Ifeanyi Okowa told journalists on Tuesday during a news briefing that "The Joint Task Force (JTF), Police, SSS, in the state have been put on alert, to ensure security, we are not anticipating any problems, even when there are rumours that some protesters will be using the President’s visit to protest, we are equal to the task," Okowa assured.